My wife and I arrived at the Augusta Marriot Hotel and Convention Center at about 1:00 pm on Friday. We checked in then took off through the hotel to the race registration area.  Registration only took a few minutes.  Then we went for a walk along the river to the swim start area. 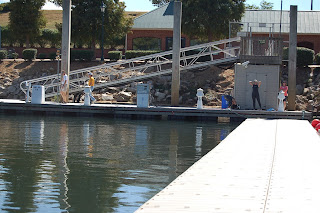 That night we ate at The New Moon Café which was very good. Athletes and their families filled the restaurant.

On Saturday morning we rode our bikes around downtown Augusta a bit before I had to turn in my bike.

Pre-race – I woke up at about 4:30 am and was on the 2nd bus to the transition area. It wasn’t raining while I was setting up my transition area so I elected to remove my shoes from the plastic bag I had brought. It was raining by the time I returned to the hotel room. I drank a smoothie, had a part of my wife’s breakfast, and some coffee.

Race – My group was the last wave of the race, wave 25 was scheduled to start at 9:06 am. Luckily I left the hotel early because the time interval between each wave had been reduced by 1-minute from 4 to 3-minutes due to the weather. The horn sounded and my group started the swim. I knew immediately that I had a problem with my goggles. I spent the next few minutes swimming a few strokes, emptying the water out of my goggles, and repeating the process. I finally gave them a good push into my eye sockets and they sealed for the duration. I was on my way down river. Sighting was pretty easy with the river bank just to the right. I’m a breathe on the right swimmer. I got to the exit ramp and headed to T1. 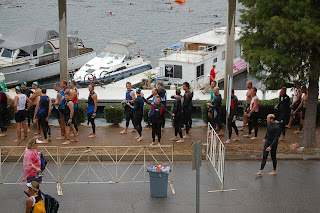 The wetsuit strippers were right there in T1. They had my suit off and handed back to me in seconds. I got to my bike and drank about 16oz of water with a little added Perpetuem nutrition. I put my socks and shoes on, my Giro Advantage 2 aero helmet and sunglasses. I had already put GU gel packets on my bike frame, Cliff bars in my bento bag, Gatorade and more Perpetuem in my 2 water bottles. I ran to the gate and was off on the bike leg, in the rain.

The bike leg went well. The rain cooled things off. I don’t think I even used all my water. I do remember reaching for a bottle of water at the first aid station and my hand being about 3 feet from the volunteer. Not even close! The course was strewn with spare tubes and tires, sunglasses and tools. I found it difficult to see through my fogged sunglasses but didn’t let them slip out of my hands. I proceeded to ride in the rain, eat my Cliff bars and was thinking to myself that I might just throw up. I didn’t but I could have! As I rode across the overpass I could hear someone on the road below me take a spill.

I got to T2 without a scratch and while there I took a second to squeeze some of the water out of my socks. I was on to the run segment of the race!

I felt good so I kept a pretty good running pace. I don’t think anyone passed me on the run but I did start at the race in the last wave of the day.

Post-Race – I could feel my knees starting to tighten up so after collecting my wife I headed straight to the medical tent to ice them down. I kept the ice on for about 45 minutes as we talked to other folks. When I removed the ice it was like I hadn’t run at all. I’ll be doing that again! 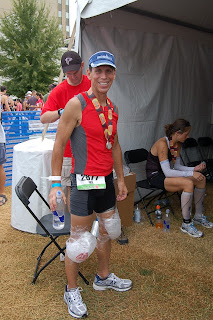 Tip – I put Bodyglide inside my socks as part of my race prep. It worked like a champ. My feet were wet and moving for 5 hours and I didn’t lose a toe nail or even get a blister. I wore Asics Kayano socks.
Race Summary – The swim was with the current of the Savannah River so that’s a plus especially since the flow of the river was increased that morning compliments of the dam upriver. The bike course was probably very nice but I was focusing so much on the road that I didn’t have a chance to see much. Running in the downtown area allowed friends and family to be close to their hotel rooms in the morning and close to the runners in the afternoon. I thought the race was well done and the venue was great too.
Posted by Unknown at 10:04 AM