I Wanna Watch the Ironman

If you're like me and are looking forward to watching the Arizona or Florida Ironman on Universal Sports and, like me, your television provider is not Comcast Cable TV then this may be the answer for you!

In a recent press release the World Triathlon Corporation (WTC) announced that Ironman Florida and Arizona will be on NBC Universal Sports on December 13th and 27th at 6PM.
As a DishNetwork subscriber I found that my channel lineup did not include Universal Sports.  I checked their website for more information and found that Comcast is the only provider in the metro Atlanta market however, it is available over-the-air.
Atlanta Comcast 245

Undaunted, I set forth to get access to Universal Sports and the Ironman coverage.  I ordered a DB2 ($35.00) outdoor digital television antenna and a 75 cm J-mount/mast ($21.42) from Antennas Direct via Amazon.com.  The $14.70 shipping and handling was waived so the total cost was $56.42.  I already had some RG-6 coax cable and opted not to order any more. 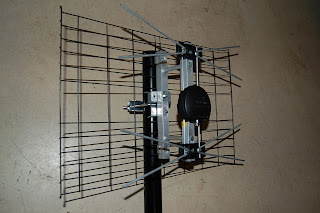 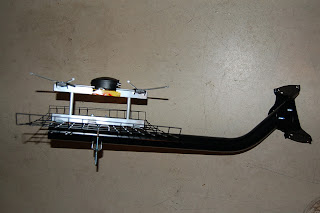 My home is located on a hill at an elevation of about 870' above sea level.  The base of the Channel 11 (WXIA 11Alive) antenna is located at an elevation of about 990'.  These elevations should provides line-of-sight reception between the two antennas.  I used a website called HDTv Antenna Labs to identify the location of the antennas in the Atlanta area.  When I entered my address I was able to get the distance and azimuth from my location to these antennas.

The DishNetwrok Receiver User's Guide recommends using the AntennaWeb.org website which showed only 2 antennas accessible from my home. 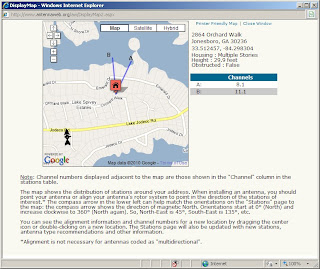 The HDTv Antenna Labs website seems to provide a far greater list of available channels.  I used the Map My Run map creator elevation feature to check for line-of-sight.

A search of the FCC's Antenna Structure Registration database shows that the 11alive antenna height is 317 meters (1041') above ground level and 624 meters (2047') above mean sea level.  The red line in the image below indicates the line-of-sight from my backyard which is 870' (not the 830' indicated in the elevation profile) plus about 20' for when I install the antenna on my fireplace chimney to the base of the 11alive antenna.

Setup was easy!  Assemble the antenna and mounted it to the J-mount.  Connect one end the cable to the antenna and the other to the ANTENNA CABLE IN jack on the rear of the DishNetwork receiver. 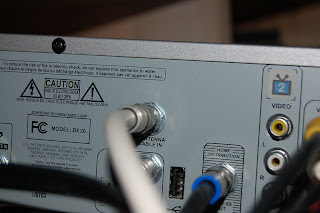 Turn power on to the receiver and television.  On the receiver remote, select MENU.  Select System Setup.  Select Local Channels.  Select Scan Locals.  The receiver will scan for channels and display the number scanned and found.  I performed the scan twice.  My first scan found 32 channels.  My second scan found 47 channels.  After the scan is complete, select OK to go back to the Local Channels screen.  Select Done when you're finished.  This will save the channels to memory.  Select Guide and to see the new channels added to the line-up.  NBC Universal Sports will be listed in the guide as 11.3.  Use the 11Alive online program guide to verify the channel and show time.  This procedure is on pages 108-109 of the DishNetwork Receiver User's Guide. 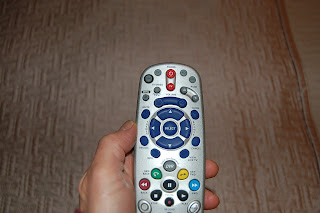 To make things easy I didn't mount the antenna J-mount to anything.  I just propped it up in a chair facing north with a few pillows.  I did notice that some of the local channels are pixilated.  This would likely clear up if I mounted the antenna outside.  A higher gain antenna like the DB4 ($45.99 on Amazon) might also be an option.  The DB2 antenna itself is only 20" wide by 13" high by 8" deep including the U-bolt used to attach it to the J-mount. 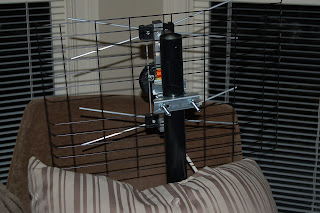 I'll move the antenna cable connection from my DishNetwork VIP222 receiver to my VIP722 DVR receiver (and the antenna to a different chair) to record the action!
If I had it to do all over again I'd order the DB4 or equivalent antenna instead of the DB2 because if provides more gain at only a few dollars additional cost and still has relatively small dimensions.
Posted by Unknown at 11:01 AM