This started as a triathlon blog but so far it's been more of a "what's on TV" blog.

Don’t try this at home!  Perched high above the ground I connect the coax cable to the antenna. 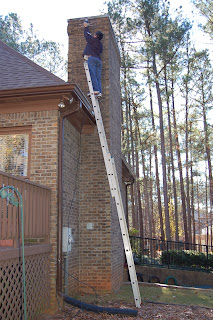 I finally moved the over-the-air antenna outside, mounted it to the chimney, and connected the coax cable. I ran about 40’ of RG-6 cable from the chimney through a hole I had drilled through the exterior brick wall and floor joist into the basement of the house. I ran the cable up through the first floor into a wall in my living room via a hole I had drilled for a previous audio/video project. Once the cable was run where I wanted it to stay I removed the excess and installed the end connector. I screwed the connector onto my VIP-722 HDTV receiver Over-the-air Antenna In connection and powered on the receiver and TV

I couldn’t find my compass but I know the antenna is pointed in a somewhat northerly direction.

The weather was clear with the temperature around 50-degrees when I performed the scans.

A look at the Universal Sports holiday line-up of shows makes all this work well worth the effort. http://www.universalsports.com/tv-listings/index.html

Ironman Florida is the race I really want to watch since I'm registered to race in 2011!
Posted by Unknown at 11:34 PM