How Much...Are you freakin kidding?

Just so you know, this blog relates to fitness, running and triathlons because with these activities along comes injuries that aren't always just a blister or twisted ankle.

The often over-hyped milestone of 50-years on this earth nears for me with the speed and ferocity of a asteroid with mass extinction potential.  I'm fortunate enough to meet the assault in good health.  My health was less good last year when I fought and won against a bout of gross hematuria.

This year my wife is experiencing her own medical issues.  She went to a specialist and was given three prescriptions.  A second visit afforded the doctor the opportunity to write two more prescriptions.  Keep in mind that NO tests have been done and no diagnosis had been made.  The second set of prescriptions is where the are you freakin kidding comes from.  These are words I said to myself and not my wife's doctor.

The physician that treated me last year was Dr. Orland Lopez at Urology of Greater Atlanta.  He was awesome...spent time...spoke with my wife about my ailment.  My primary care physician, Dr. Elliot Royston has also been awesome.
Susan's experience has been less awesome.  I think her doctor is a deaf mute.  She enters the room like a wisp of wind in a scary Hollywood movie.  What was that...I heard it too...followed by the odd prescription of unknown origin for unknown results.

My sister-in-law is a Harvard educated pharmacist currently working at a large south Florida hospital.  My brother-in-law manages a hospital lab and their son is a medical student.  Another brother-in-law sells medical equipment and his wife is a registered nurse at a hospital on the north side of Atlanta.

I took the two latest prescriptions to the local pharmacist.  She was able to fill one prescription but not the other.  I brought the drugs to my wife and called around to locate the second prescription.  Unsuccessful, I returned to the original pharmacist later that day and the pharmacist ordered the drugs.

With both drugs in hand Susan was ready to continue her treatment and recovery.  That's when she noticed the cost.  I have health insurance and I pay a $40 co-pay for prescriptions.  On the sales slip for the first prescription it said that I save almost $300.  My insurance company picked up that tab.  The second sales slip said that I saved $720.  Do you mean to tell me that my insurance company had to pay over $1,000. for two drugs!  The second drug cost over $27 each. 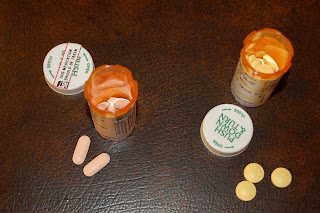 Here's the kicker, these were labeled as "NEW" drugs.  Maybe this was to indicate that it was a new prescription or a new drug, I don't really know.  My sister-in-law had not even heard of the second drug.

Can you say KICKBACK!  Prescriptions are like frequent flier miles, but better.  How many Braves tickets can I get for one prescription of ALINIA?  I spend 5 years accumulating credit card reward points so I can get a new coffee pot.  A doctor writes a few scrips and the next thing you know he's on vacation skiing in Vail, Colorado.

If you've seen the movie Love and Other Drugs you'll know exactly what I'm talking about.

Thanks for reading my rant!
Posted by Unknown at 11:40 AM