Fifteen Down - Five Weeks to Go!

Week 15 of My Ironman Training Plan is done.  The week started on Sunday, September 25th and ended on Saturday, October 1st.  Weeks 15 through 17 are defined in the image below. 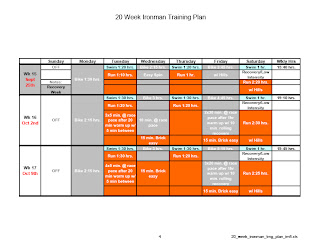 This was supposed to be a recovery week with 15 hours and 40 minutes of training.  For once I out did myself.

On Monday I rode 10 miles with Susan at an easy pace followed by a 20 mile fast paced solo ride.

On Wednesday I rode 10 miles with Susan and later in the afternoon rode 22 miles with the Southern Crescent Cycling club group out of Epic Bikes.  It's getting dark earlier so we've been cutting our rides short.  There were 11 of us in the "A" group which is about half the usual number of riders.  Many of our group had ridden the Six Gaps ride in north Georgia over the weekend and were probably still feeling the effects.

On Thursday I rode 10 miles with Susan, swam 2 miles in the lake and ran 6.2 miles.  The swim felt good.  I didn't push the pace.  I did push the pace on my run though.  In lieu of a longer run I ran a shorter distance at my best training pace thus far for a 10K at 7:21 minutes per mile.

On Friday Chip, Richard and I had a big training day planned.  We met at the Silver Comet Trail for a planned 112 mile ride followed by a short run.  We took off from the Mavell Road parking area at around 8:45am heading west toward Alabama.  The trail was not as crowded as it was only a few weeks ago.  The weather was partly cloudy with the temperature in the mid-60's at the start.  We passed through Cedartown at the 50 mile point and continued on to mile marker 57 which was our turn-around point.  Just before the turn around we were passed by three younger riders heading east toward Atlanta wearing matching PT Solutions kit.
At the turn-around we stopped for a short break before continuing back to Cedartown where we took another break and bought some snacks and drinks.  Back on the trail again after our second break at the old train station we maneuvered over the numerous railroad tracks and street crossings passing over the hills of Mount Trashmore between Cedatown and Rockmart.

For the first 80 miles of our ride we were laughing and cuttin' up.  Richard was even singing a Beatles tune.  The last 32 miles were a different situation.  Our little group fell silent as we worked the last miles back to the start.  At around 98 miles into our ride we finally passed 2 of the 3 team riders we had seen before our turn-around.  As we closed in on them one of the riders took off leaving the other 2 to have their hopes and dreams crushed by we three old farts.  It felt good!

Chip had to leave after we arrived back at our Mavell Road starting point in Smyrna.  Richard and I ran 4.8 miles at an easy pace.  Friday was a good workout day.

After the ride and before the run I checked my cellphone and saw that my wife had called.  I called Susan to update her on the day's training.  She told me that the custom kit I ordered last month had arrived and she was rummaging through the box.  I'll post pictures of the crew in the new kit asap!

Thanks for reading.
Posted by Unknown at 4:08 PM