The incident referred to in this article started in May of last year.  It is only after 10 months that I feel confident enough to publish.  Confident in that whatever it was that manifested itself has, over the course of these months, not gone away completely but subsided significantly enough to not be alarming.  That being said, please read on.

Athletes often complain about sore muscles or back aches.  Runners have got the ever present threat of blisters, IT band and Plantar Fasciitis issues, and worn-out knees.  Cyclists have their own host of ailments to contend with.  Throw a bike wreck in the mix and the list of potential problems goes through the roof.  Swimmers, other than drowning, usually have fewer injuries.  Although, I do hear of some people giving various reasons as to why they performed poorly during the swim segment of a triathlon.  The reasons usually are tied to some chronic injury.  The description of these injuries are usually limited to "I pulled something".  Most injuries are an annoyance but some are worse.

I think I've had an illness, I suppose it's more like an affliction, for the past few months that is definitely annoying.  I feel like I'm falling apart.  Hopefully that's not the case.  After two races and swimming in Lake Peachtree, Lake Spivey, and Lake Hartwell I'm left with an odd malady.  Whether it's related to the lake water I don't know.  If you were ever a kid growing up in the southern United States then you've probably experienced Ringworm, also known as Tinea which I've learned means fungus.  Well, that's what I thought I've been experiencing and trying to treat.  Tinea presents itself as an itchy red and slightly raised skin rash which is surrounded by a red-ish ring.  I tried all the recommended over-the-counter ringworm/antifungal medications.  They seemed to help at first but the medications weren't able to cured the spreading itchy red spots.  I visited a dermatologist and got a wide assortment of prescription meds.  None of them worked.  I suppose that's partly because the dermatologist diagnosed it as eczema (or possibly ringworm).  That's what I get for finding a doctor on the Internet.  I was desperate for a quick appointment.  The doctor said my skin was dry due to all the recent swimming and exercise.  He recommended that during subsequent showers I should use a milder bath soap and should use lotion to keep my skin moist.

In addition to the anti-fungal meds, I've got an assortment of cortisone and steroidal creams.  I've even got eye drops for a bump on my left eye which is unrelated to the Tinea.  I did say I was falling apart, didn't I? The eyeball thing isn't a big deal and I've been to the doctor recently for that too.

Desperate for relief I contacted my primary care physician, Dr. Elliot Royston, in Tucker, Georgia.  His staff got me in to see him within a few days.  He's an awesome doctor and hooked me up for prescriptions for two new meds,   I flew to the pharmacist and waited for them to fill my order.  I was in business - a cure was at hand!
With my new drugs at home, I started my week long regiment of tableted relief.  Within 12 hours I was feeling better.  I thought I'd won the war.  However, as my regiment of meds diminished the rash returned with a vengeance.  By the 6th day I was crawling out of my skin.  The rash was almost everywhere, legs, arms, stomach, back, etc.  I made an emergency call to Dr. Royston's office.  He called me back about two hours later.  He hooked me up again with another regiment of Fluconazole and, this time Prednisone as the other drug.  Susan ran to the pharmacist before they closed for the evening as I tried to take a nap before going to work late.  I wouldn't be sleeping so I might as well work.  I spent the next ten hours until 6:30am in terrible shape.  I finally got home early in the morning, took my second regimen of drugs and took a hot shower scratching.  It felt so good that I fell right to sleep.  I felt even better when I woke up.  The red spots where still here and there but they weren't as bad as they had been the day before.

I met with a second dermatologist the following week just as my second course of meds ran out.  I was unable to show him any itchy circles.  The medication was still working.  He was still able to tentatively diagnosis my condition as being related to my body's release of histamine and not Ringworm at all.  So, I'm allergic to something.  Great!  What is it?

This is my lot in life.  The more fit I get the more my body seems to break down.  The itchy red spots started in June.  It's now the end of September and they're still a problem.  What have I learned from my health issues?  So far all I can say is "Do not stop taking the Zyrtec" and have good doctors.

I'd like to thank Dr. Elliot Royston for helping treat me and getting me in touch with a good dermatologist.  I suppose my next course of action is an allergist.

Update (1/6/14):  I'm 4 weeks into my second bout of hives.  I've tried all the stuff shown below.  The only thing that seems to work somewhat is Zyrtec and prednisone. 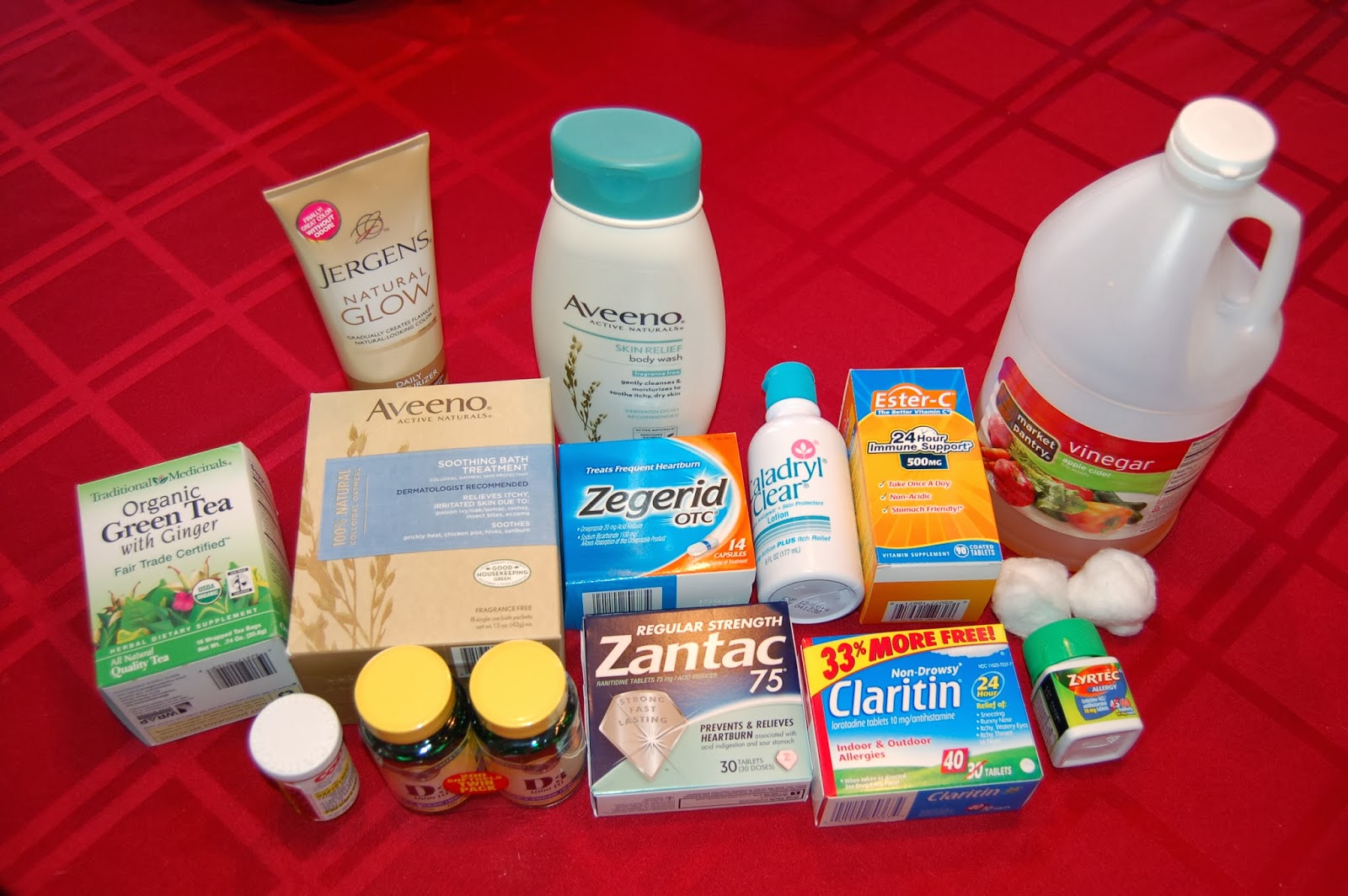 Update (1/23/14):  As anyone with hives will likely attest, a cause is rarely identified.  That is the case with me as well.  After a litany of blood tests no reason was isolated for my hives.  I'm pretty sure that they'll just go away on their own in a month or so.  In the meantime, the doctor has me on a regiment of one 180mg Allerga tablet in the morning followed by two 10mg Zyrtec tablets during the day.  The Zytrec doesn't make me sleepy so it's okay to take when I work.  I hope this helps anyone else in the same "itchy" situation.
Posted by Unknown at 6:34 PM