Trek from Trek to Trek Ride 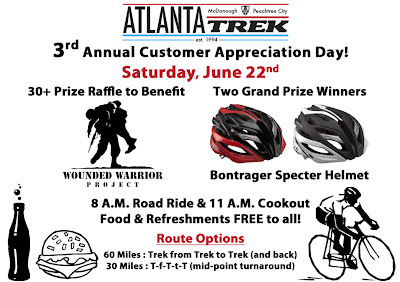 Saturday, June 22nd was the 3rd annual Atlanta Trek Customer Appreciation Day.  The day featured a 60 mile "Trek from Trek to Trek" bike ride.  The ride started at 8:00am from both the McDonough Trek shop and the Peachtree City Trek Shop.  The plan was for the two groups to meet in the middle at Woolsey Baptist Church at the corner of Antioch Road and Hampton Road west of Woolsey, GA.  There was also a 30 mile option that turned around at the church and a 15 mile option that stayed near the shop in McDonough.

A quick briefing before the ride.

Derek Arwood brought his 8 bladed flying camera machine along with us to practice aerial video recording.

The group stayed together, as much as possible, for the ride on GA-20 to the Atlanta Motor Speedway.  From AMS it was all out for the lead group until we reached the church.  At the church we had a brief respite before continuing into Peachtree City.  The last mile or so was on the cart paths and through a parking lot.  We'll probably have to change that next year.


At the PTC Trek shop we refueled and readied for the ride back.  As I was in the shop talking to someone my group took off on the return trip to McDonough.  I was probably at most 60 seconds behind them.  It just so happens that 60 seconds coupled with two red lights make it impossible to catch a group of riders bent on hurting themselves.  I really can't say for sure that they were hurting but I sure was as I came close but never could rejoin the lead group.

Back at the shop in McDonough Alec was grilling up a mess-a-burgers and hot-dogs.  My stomach had started to eat itself at that point.  I grabbed a burger, ate it, and grabbed another.
Overall, or as compared to last year when the weather was reportedly freakin' HOT, everything went off without a hitch.  It was a great ride.  We (Trek) had good participation.  About 50 riders.  The route was good.  The weather was good.  The food was good.  Sign me up for next year.

I had to leave the shop for work soon after the ride was done.  I bought six raffle tickets to support the Wounded Warrior Project on my way out.  Alec called me later to tell me I had won a pair of sunglasses.  What a great way to end the day!

Thanks for reading.
Posted by Unknown at 10:26 AM