My Journey to Ironman Florida 2011 Begins

My journey to compete in the 2011 Ironman Florida race began with jury duty in Febuary of 2008.  While wasting the day away and fulfilling my civil duty I did a little research on foot races with my laptop computer.  I'd always enjoyed running and prided myself at being pretty good at it for having never been on a track team or been coached.  That Febuary I decided to see if I could get a foot race started to promote my community.  I live near Lake Spivey, Georgia.  Lake Spivey is a 650-acre private lake just south of Atlanta in Clayton and Henry Counties.  I eventually created the Lake Spivey Road Race 15K and 5K which I also directed from 2008 through 2010.  While working on the race I met Jim and Mary Ann Macie.  Jim is an avid runner having finished 48 races in 2009 before taking off all of 2010 for a well needed break.  As I organized my own race I decided to compete in several other races to help reaquaint myself with the process and the running community.  I hadn't run a race since the Charles Harris 10K in 2003.  That was 6 years before the 2009 Vining Rotary 5K which I would call my rebirth into the running world.  Jim and I both ran that race.  I entered a few more races during the next 12 months.

At work I met Chip West, the weatherman.  Chip had done a few triathlons and I was intrigued.  I had done a few triathlons 20 years ago and was a avid cyclist at the same time.  That was a long time ago and my Trek 1500 road bike had long since been donated to charity.  I had been a pretty good rider though having once ridden over 300-miles from Griffin, Georgia to St. George Island with several friends in 2-days.  After talking to Chip several times, like the Flu and without a shot, I had caught the triathlon bug.   All I needed was a bike and no entry level bike would do.  If I was going to compete I wanted to win.  I continued to enter foot races as I researched triathlon bikes, started collecting my gear, and negotiating with my wife Susan.  I registered for the September 26th, 2010 ESI Augusta 70.3 half-ironman without a bike.  I knew that I'd probably need one to finish the race before the cutoff time.  I finally got my bike in August.  A beautiful 2010 Dura-Ace Quintana Roo CD0.1 with an XLAB carbon wing from All3Sports in Dunwoody, Georgia.  I had ridden only about 700 miles before competing in the Augusta HIM.  I finished 37th in my age group (45-49).  I had already finished 3rd in my age group at the Tri to Beat Cancer sprint triathlon in Athens, Georgia the month before.  After finishing 2 triathlons and several foot races I decided to step it up a notch.  I had done relatively well in my previous races and had progressively improved so, after some discussion with my wife I decided to sign-up and compete with the big boys.  Registering for Ironman Florida is an event in itself.  After hearing how the event sold out in mere hours I was poised and ready when registration opened on the day after the 2010 race.  I should have worn my heart monitor, it's a nerve-wracking experience!  As expected, registration sold out in only a few hours but I was in, as were several of my friends.  It's going to be a group event.  We are Chip West a 2010 Louisville Ironman veteran, Richard Black a veteran of several half-ironman distance races, Ken Cook a veteran of the 2010 Augusta half-ironman, and myself also a veteran of the 2010 Augusta HIM. 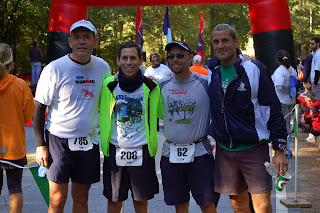 (pictured l-r are Chip West, me, Richard Black, and David Rehm.  Ken Cook is not pictured)

The four of us will be training together and racing in shorter events as our training progresses.  I will document our journey.
Posted by Unknown at 9:13 PM