Here is a brief race report from the inaugural 2010 Tri to Beat Cancer in Athens, Georgia. This was my first triathlon in about 20 years. The race is a sprint triathlon with a 400 meter swim, 16 mile bike, and 3.1 mile run.

My wife went with me to the race. We had about 70 miles to drive so we left our house at about 4:30 AM. The race didn’t start until 7:00 AM. It was still dark when we arrived at Sandy Creek Park with the first few participants. I’m sure many of the volunteers had been there long before us. 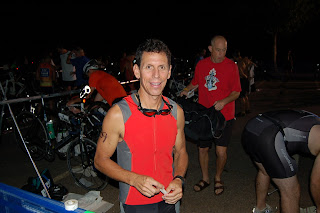 The registration process and transition setup went smoothly. After that was done we waited for the race to start. The race started in waves and I was in the second or third wave. Even though I have access to a neighborhood pool, I had only trained for the swim in Lake Spivey, a 650-acre private local lake, so I felt ready for that portion of the race. As my swim wave started someone kicked me right in the face. I hadn’t trained for that! I regained my composure, re-adjusted my goggles and continued the swim. As I rounded the second buoy I noticed another swimmer aggressively clawing for a handhold on the buoy. I guess someone had kicked him in the head too. I got to the shore and ran up the hill to T1. 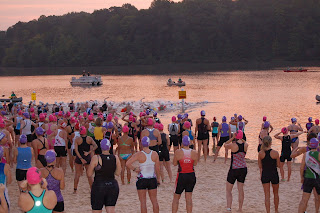 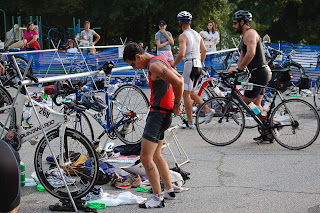 The run segment had runners do 2 laps in the park. 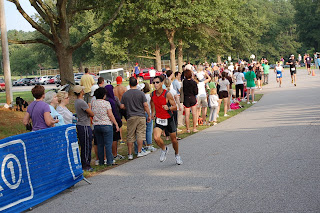 I felt like I had finished in good time so my wife and I waited for the results to be posted. 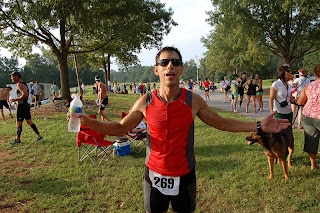 The results were soon posted and we found that I had finished 39th overall male and 3rd in my age group. Pretty good for my first triathlon in 20 years! 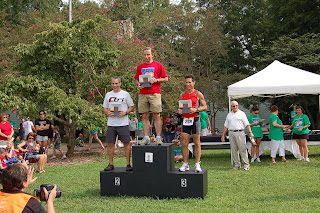 Summary – This race was well supported. The race venue offered ample parking. There were plenty of volunteers and race officials. Vince Dooley was on hand to give out the awards which were very nice handmade pottery plates embossed with the race logo. The race shirts were also very nice red short-sleeve technical shirts. There were plenty of water stations on the course. After the race there was lots of food and drink. I liked the idea that non-participants could buy a cookie or cup of coffee without paying through the nose. I would recommend this race to anyone.
Posted by Unknown at 8:26 PM