The 2011 ESI Ironman Augusta 70.3 is in the books.  I did not compete this year, but I did compete in 2010.  I tracked several of the athletes for much of the day.  I was especially interested in a few that I know personally and are competing with me at the 2011 Ironman Florida race in November.

Chad's wife Tamara finished in 6:19:15.  Carlos Talbott, a cycling buddy also competed and finished in 6:06:56.  Tamara and Carlos are not doing IMFL.

Here are some screen captures of each of these athletes. 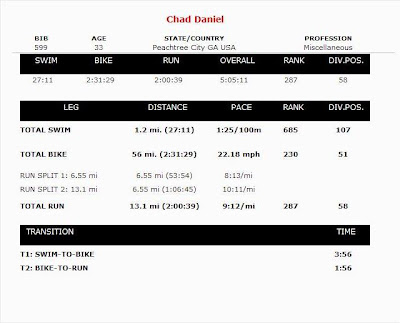 Chad had a great bike and his transitions were fast but he gave it up on the run. 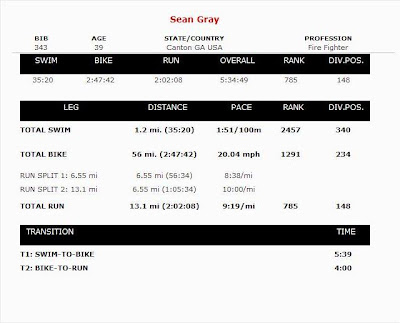 Sean had a good race overall but could use some improvement in the swim, bike, run, and transition segments of the race. 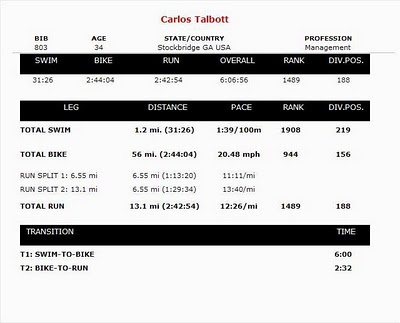 Carlos must have walked the whole half-marathon.  You need to run more laps buddy. 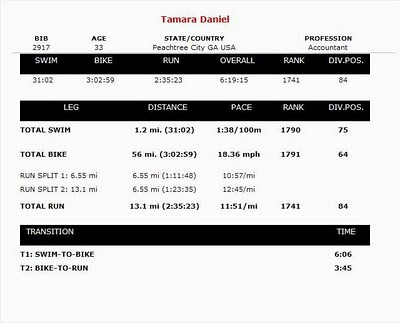 Tamara kicked it on the bike (for a girl), but she must have been walking with Carlos on the run.  She had to be using Chad's training plan. 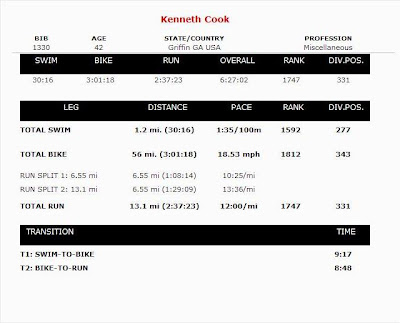 Ken had a solid swim and a respectable bike segment but his transitions are ridiculous.  What was he doing for over 19 minutes?  I hope he didn't lose his bike in transition.  That would be humiliating!

Here's where the "smack talk" starts/continues.  You will note in the image below my own measly performance from the 2010 ESI Ironman Augusta Half-Ironman race.  If I recall correctly, and I think I do, I had been training on my wife's pink cruiser before buying my Quintana Roo CD0.1 bike less than three months before the race.  I believe my pre-race bike training included a total of about 700 miles on my new bike.  I also recall that it rained for much of the race.  Here are my results. 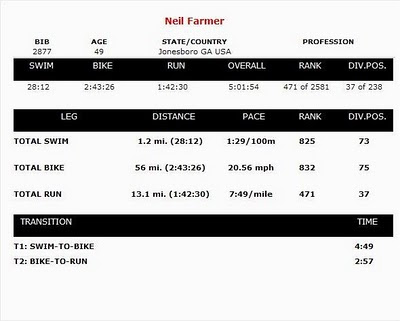 So, as an old fart of 49 years, it would seem as though at least one of these young bucks could beat my finish time of 5:01:54.

I sure am looking forward to Panama City Beach, Florida.

Okay, I'm really proud of all the athletes, especially the ones I know.  Good job!

Thanks for reading my tactless blog.
Posted by Unknown at 4:23 PM