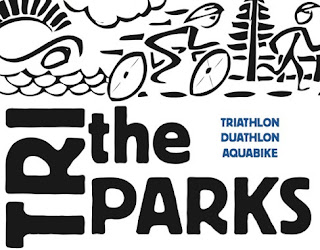 The 2011 Tri the Parks (John Tanner #2) Sprint Triathlon on Saturday, September 10, 2011 started shortly after 8:00am at John Tanner State Park in Carrolton, Georgia.  As of last year John Tanner State Park is now a county park.  The park is 80 miles west of my house on the south side of Atlanta.  Susan and I woke up at 3:30am.  I drank a can of Coke, a smoothie, and a cup of coffee.  I was trying to get myself all lubed up, so to speak.  My efforts would be rewarded later on at the port-a-john.

We left the house at 5:00am and arrived at the park at around 6:40am.  Susan brought a huge cup of coffee.  It was still very dark as Susan, Max and I walked through the park.  I had plenty of time to check-in, get body-marked, setup my transition area, and get to the beach for the start.  There was a $5 fee per vehicle to enter the park.

The course is a 600 meter swim, 13.8 bike, and 5K run.  The swim course is a long triangle swam counter-clockwise around 2 buoys to the shore.  The bike course is ridden clockwise with all right turns.  The run course went through the park pavilion area and counter-clockwise halfway around the lake to a short stint on a gravel road, to a very hilly mile or so to the turn around and back to the lake and across the dam to the finish line.

The first of 6 waves started just after 8am.  Each wave left the start 3 minutes after the previous wave.  I was in the 5th wave before the novices in wave 6.  I swam a few warm up laps before the start.  The water temperature was perfect and just barely legal for me to use my wetsuit.  The air temperature made it feel very cool.  I think I could have sold my wetsuit for a handsome profit.  I moved up to the front of my wave group and waited for the start.  We got the signal to go and headed out toward the first buoy.  This was the first time I'd worn my wetsuit since May.  I felt like I was really moving fast in the water.  I finished the 600m swim segment in 11:59 which is right at the 2:00 per 100 meter mark.

I ran into the transition area and stopped at the end of the second rack.  My bike was gone and so was my stuff.  I spent the next 45 seconds or so turning around in circles looking for my stuff.  I finally took a breath and looked to the left.  That's when I remembered the second set of racks.  I ran down to my rack to find my bike and stuff.  There it was.  I pulled off my wetsuit, put on my bike gear, and ran over to the mounting line.  As I mounted my bike another rider next to me did the same and she promptly fell over.

I finished the 13.8 mile bike segment in 39:46 averaging 20.8mph.  This is the area where I would like to improve the most but I can't complain about my performance on this day.

I returned to the transition area and headed out on the run.  The 3.1 mile course was hillier that I had expected.  I felt good though after I got my legs and motored past half a dozen guys in my age-group in the last mile.  I finished the run segment in 21:16 averaging 6:51 per mile.

I finished the race 30th overall and 1st place in my age-group.  My time was 1:16:21 and I received a medal for the efforts.

On the way home Max, Susan and I stopped off for some burgers at Sonic.  Max can always recommend a burger joint.

Susan and I took a few pictures during the day.  Click the image below to open the photo album.


Thanks for reading.
Posted by Unknown at 9:13 AM