I ran into my neighbor Brent today as I exercised my right to vote.  Brent lives on Lake Spivey and is administrator for the Lake Spivey Civic Association (LSCA) of which Susan and I are also members.  The civic association maintains Lake Spivey, a 600+ acre private lake in Clayton/Henry County, Georgia.  The lake was developed and later donated to the association years ago by Dr. and Mrs. Spivey.  The lake is where I swim train for triathlons.  I rarely swim in a pool.  Brent knew that me and several friends had been swimming in the lake so he took the time to tell me about an upcoming event which will take place there. 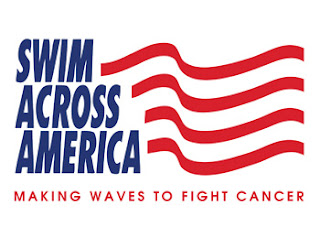 With help from Olympic gold medalist and Lake Spivey resident Steve Lundquist, Swim Across American is organizing a charity event at the lake on May 5th (Cinco de Mayo), 2013.  Swimmers, including several Olympians, are expected to participate in a 1 mile, 5K (3.1 mile), or 10K (6.2 mile) open water charity "swim-a-thon" to raise money for Aflac Cancer & Blood Disorder Center at Children's Heathcare of Atlanta.  Individual swimmers must raise a minimum of $500.  Teams are required to raise a minimum of $5,000.  All funds must be raised by the day of the event.

The three courses have already been mapped out, wetsuits are "legal", and there's little chance anyone from this crowd will kick me in the head or try to swim over me to exit the water first.

I don't particularly like charity/fundraiser events, where I might have to do any work (begging), but I'm thinking seriously about this one.  If nothing else, this could be a great way to prepare for the 2013 Ironman Florida race later in the year.

Brent also said that not all the paperwork has been finalized so some things could change but it looks like it's a go since someone has already put it on the SAS website.  As they say "they wouldn't put it on the Internet if it wasn't true".

Update (2/16/13):  I proposed to the Lake Spivey Civic Association (LSCA) that, as a civic association member, I would create a 10 person team to represent the association if they would pay the $4,500 difference between the registration fees and the $5,000 minimum required donation for teams.  Any additional funds raised by the team beyond the $5,000 would go directly to the charity.  The association declined my offer.  I wish this event the greatest success but regrettably will not be participating.
Posted by Unknown at 3:45 PM