Training with a Hernia

I have an inguinal hernia.  I have no idea how I got it, but that doesn't matter.  It's there and I have to deal with it.  If you don't know, an inguinal hernia is one that doctors check for during a physical examination - "turn your head and cough".  Sorry, no pictures of my hernia!  But here's a picture of the snake Susan and I saw before a swim a few weeks ago. 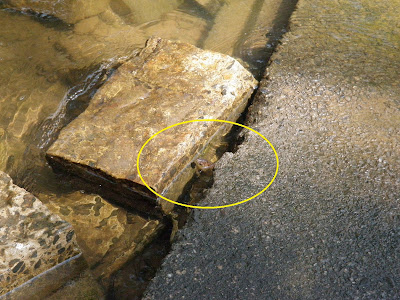 ...and a picture of me and a friend swimming with Susan following in the kayak. 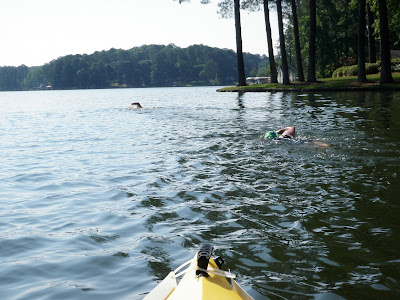 So, how does a hernia fit into my training for the Augusta Ironman 70.3 and Ironman Florida?  Pretend that it doesn't exist, of course!  I have elected to forgo any surgery until after November 2nd, the date for Ironman Florida.  What I have done is reduced my running.  When I do run, my first thought is to empty my bladder to reduce any weight on my hernia.  However, the gross hematuria that I had before the 2011 Ironman Florida race is back.  To prevent those symptoms, which are blood in the urine, my doctor told me not to empty my bladder before I run.  It's a catch 22!  Fortunately, it's only a big issue during the hot summer months.  September and October should be better.  I just need to stay hydrated and keep training. 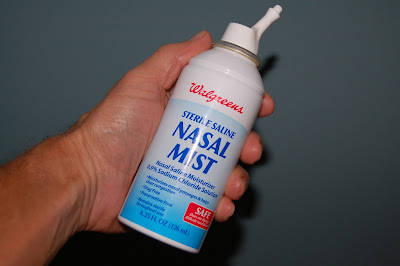 Another thing that anyone with a hernia will know is that a sneeze hurts.  I don't have any really allergy issues but I have noticed that I sneeze about a dozen times after I swim.  I'm sure that it has something to do with lake water getting into my sinuses.  I don't swim with a nose clip but I have started using a nasal spray to flush out the dirty lake water.  It seems to work pretty well.  I've used it twice so far and its reduced my sneezes to only about three times during the course of the day.  That's about a 75% reduction.  When I do sneeze I have to drop everything to prepare.  I push in on my hernia so as not to tear it any more.  Ah, the pleasures of getting old. 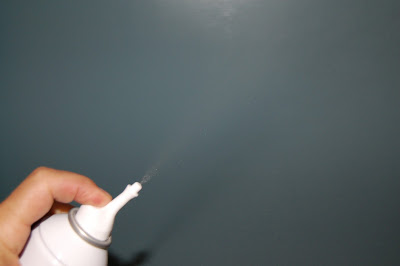 The can shoots out a fine mist.

All that being said, watching a re-run of the 2012 Ironman World Championship in Kona on TV really brings things into perspective.  Several of the athletes competing in Kona last year were cancer survivors.  Some of whom were even having chemotherapy treatments while they trained.  I'm such a wuss!

Thanks for reading.
Posted by Unknown at 7:20 PM