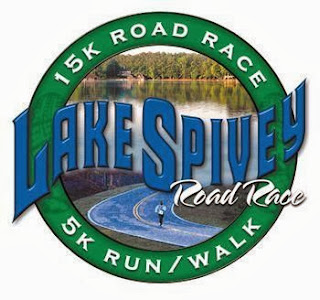 On November 2nd, 2013 several southern crescent residents will be in Panama City Beach (PCB), Florida competing in the 2013 Ironman Florida triathlon.  I'm talking about my awesome Southern Crescent Cycling teammates Stephanie Critchfield, Jason Reeves, Carlos Talbott, all residents of Henry County, Georgia and me, a resident of Clayton County.  My friends Jared Hanson and Chad Daniel, both of Peachtree City in Fayette County, Georgia will also be competing.  They pushed me on
the bike this year when no one else could.  I pushed them too, but it wasn't forward, it was down onto the railroad tracks in Atlanta.  Sorry guys!

Anyway, shortly after our race starts competitors in Lake Spivey, Georgia will be running in the 6th annual Lake Spivey Road Race (LSRR) 5K (3.1 mile) and 15K (9.3 mile).  The LSRR was an event I created in 2008 to promote Lake Spivey.  Anyone who has done a search of the results from the popular Peachtree Road Race (PRR), or any other local race, is well aware that the southside of Atlanta is not well represented.  This is especially true for cities in Clayton County like Rex, Lovejoy, Morrow, and Forest Park.  Even the county seat of Jonesboro will have only a few runners participate in the PRR each year.  Clayton County seems to be almost void of runners or anyone interested in fitness.   Neighboring Henry and Fayette counties, on the other hand, are well represented considering their lower population density.  It should be noted that a portion of Lake Spivey resides in Henry County.   The Lake Spivey race was an effort to change that trend and get residents interested in fitness and the community.

Before the gun was fired starting the first LSRR in 2008 there was a great deal of work to do.  This was my baby.  My idea and my project to complete.  With Susan's help and the technical expertise of my friend Joe we got to work.  The goal was to create a course that would draw runners from the greater metropolitan Atlanta area and highlight the communities around the lake and golf course.  To accomplish that goal something greater than your standard 5K or 10K was needed but not something so challenging that we couldn't pull it off.  With the help of seasoned race director Gary Jenkins a 15K course around the lake was decided upon as the main event.  I can't say enough good things about how Gary helped us that first year.  A 5K course was also outlined near the golf course.  The 5K and 15K courses were designed and subsequently certified through the USA Track and Field (USATF) organization.  At the time, the Lake Spivey Road Race 15K was one of only three USATF certified 15K courses in Georgia.

With the courses certified, sponsors were the next important task on the agenda.  Fortunately, several sponsors stepped forward.  Most notably my friend and avid fellow runner Jim Macie was there with his enthusiasm for the event and a check from his law firm Meadows and Macie.

A date in early November was selected that wouldn't conflict with too many other events.  Now in it's 6th year, the race continues with the bulk of the organizational tasks performed by Clayton County Parks and Recreation Department personnel.

So, if you compete in this year's Lake Spivey Road Race take a second after you're done to think about those of us competing in the Florida Ironman triathlon.  Our day of racing will likely end late Saturday and, if you're so inclined, you can watch us race streaming live online at www.ironman.com.

Thanks for reading.
Posted by Unknown at 5:47 PM