I wanted to try a new way to hydrate while running without the use of a belt type system.  I already have three of those and I like them even though I haven't had the need for one lately.  Most of my recent runs have been less than 8-miles in length.  That will likely continue to be true for the next few weeks.  Since I'll be running in an area where I'm somewhat unfamiliar, carrying a water bottle should add a little bit of security.  I can take my keys, ID, some money, and water with me as I explore.  This really came to a head yesterday as I ran in Egg Harbor, New Jersey.  I searched Garmin Connect for possible routes and found none near me.  I then searched MapMyRun for courses and found a few routes near Veteran's Memorial Park in Egg Harbor, New Jersey.  That's just a few miles from the hotel where I am staying.  I thought the park would be a good place to park while I ran and maybe I'd find some other runners there.  I had driven by the park many times some 20 years ago and knew the area to be pretty nice.

My route from the park was counter-clockwise onto Ocean Heights Avenue, left onto English Creek Avenue, left onto School House Road, left onto Zion Road and a final left back onto Ocean Heights Avenue.  There are some sidewalks on Ocean Heights Avenue but the rest of the route has only the roadside median which is from 18" to 48" in width.  The traffic was heavy at the time I ran but the road was wide enough for motorists to give me a wide berth.  It was a pretty good route if you're not afraid of running along the median.  I feel compelled to point out that as I neared the finish of my run and I turned onto Ocean Heights Avenue I thought I was lost.  With no street signs visible I thought that maybe I should have turned right instead.  It's only now that I look back at my route that I know the names of all the roads.  I asked an elderly couple in the CVS Pharmacy parking lot if they knew the direction to Veteran's Memorial Park.  They did not so I decided to ask someone inside the pharmacy which I did and I set off on my way again.  As I exited the pharmacy parking lot the couple reappeared.  They had left the store, seen the park down the street, realized the name of the park was what I had asked them , and returned the CVS to help me find my way.  That was awesome!  The couple pointed me in the direction of the park and asked if I needed a ride.  I thanked them and told them that I did not.

After that run I decided I needed to prepare a little better.  I wore my Garmin watch, a kit that was brightly colored so drivers could easily see me, and my RoadID so that my body could be identified should the need arise.
The Nathan SpeedDraw Plus features a small zippered pocket which the tag states "Pocket fits all iPhones".  That might be true but it doesn't come close to fitting my Samsung Galaxy s5 with OtterBox case.  The 18 ounce (closer to 16.5 oz) bottle or flask is not insulated.  The design seems light weight and easy to carry.  It features several reflective bands and the bottle valve is auto sealing in that pressure must be applied to the bottle for water to flow.  The bottle cost $24.99 at Sports Authority. 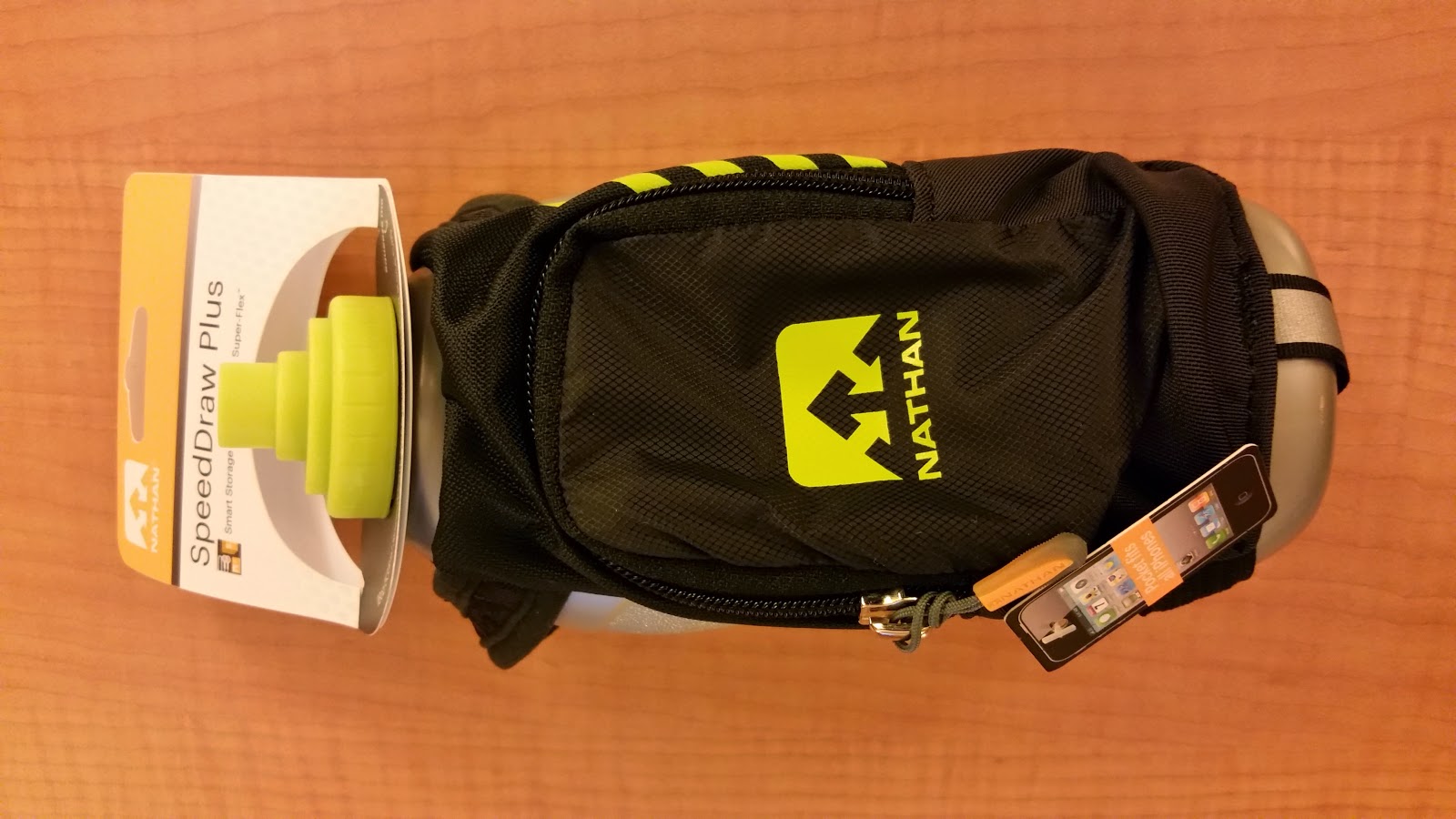 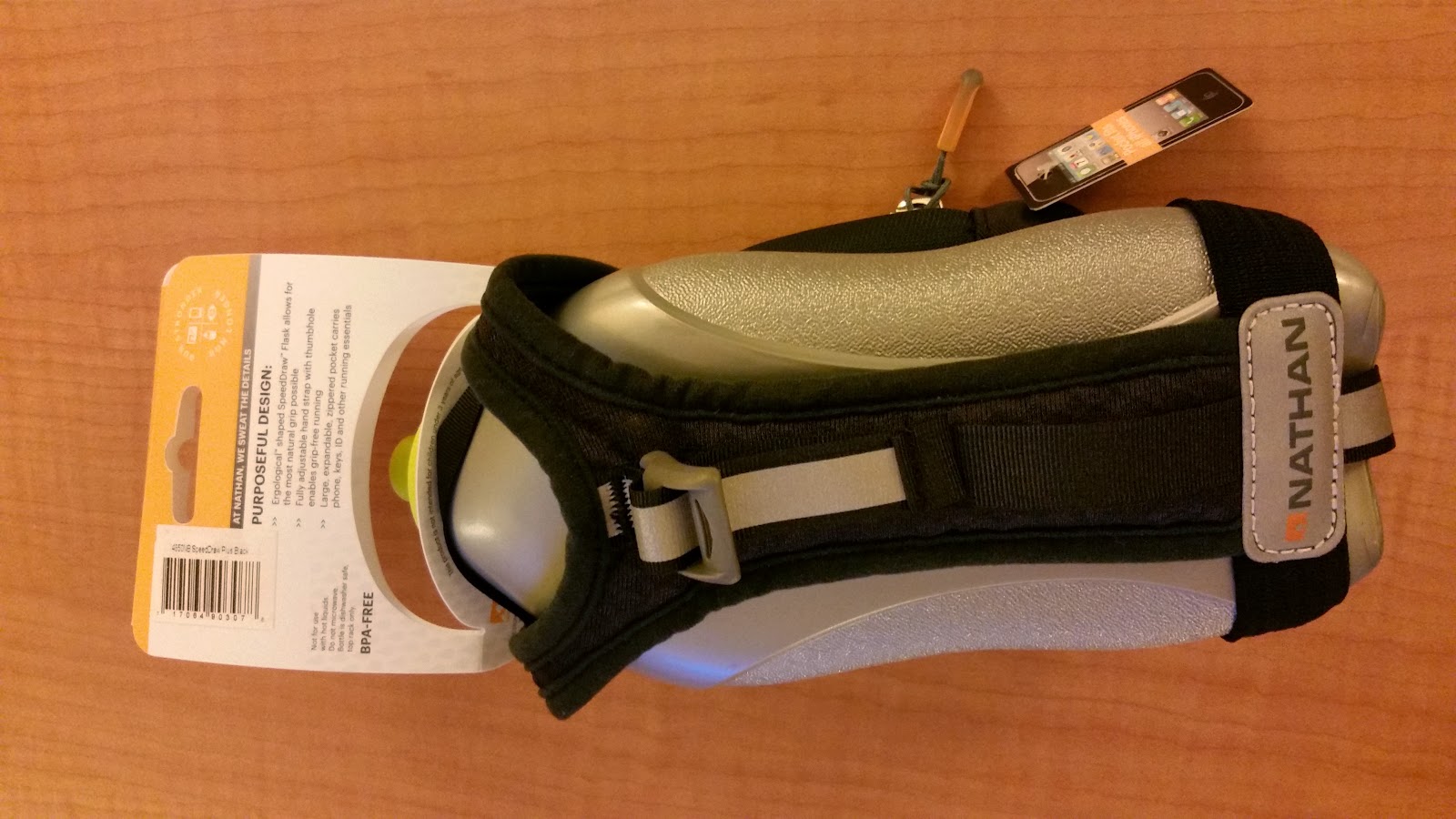 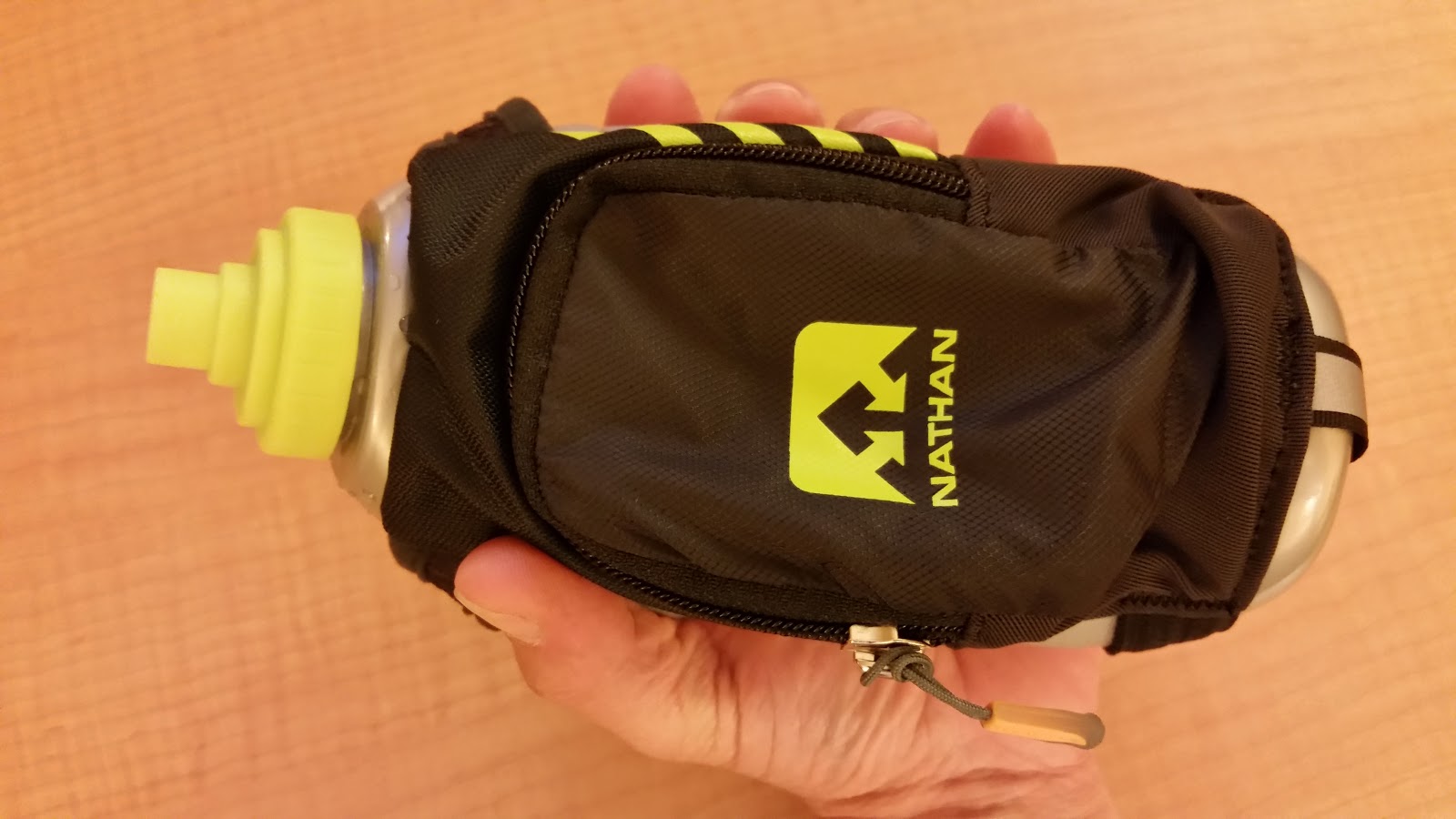 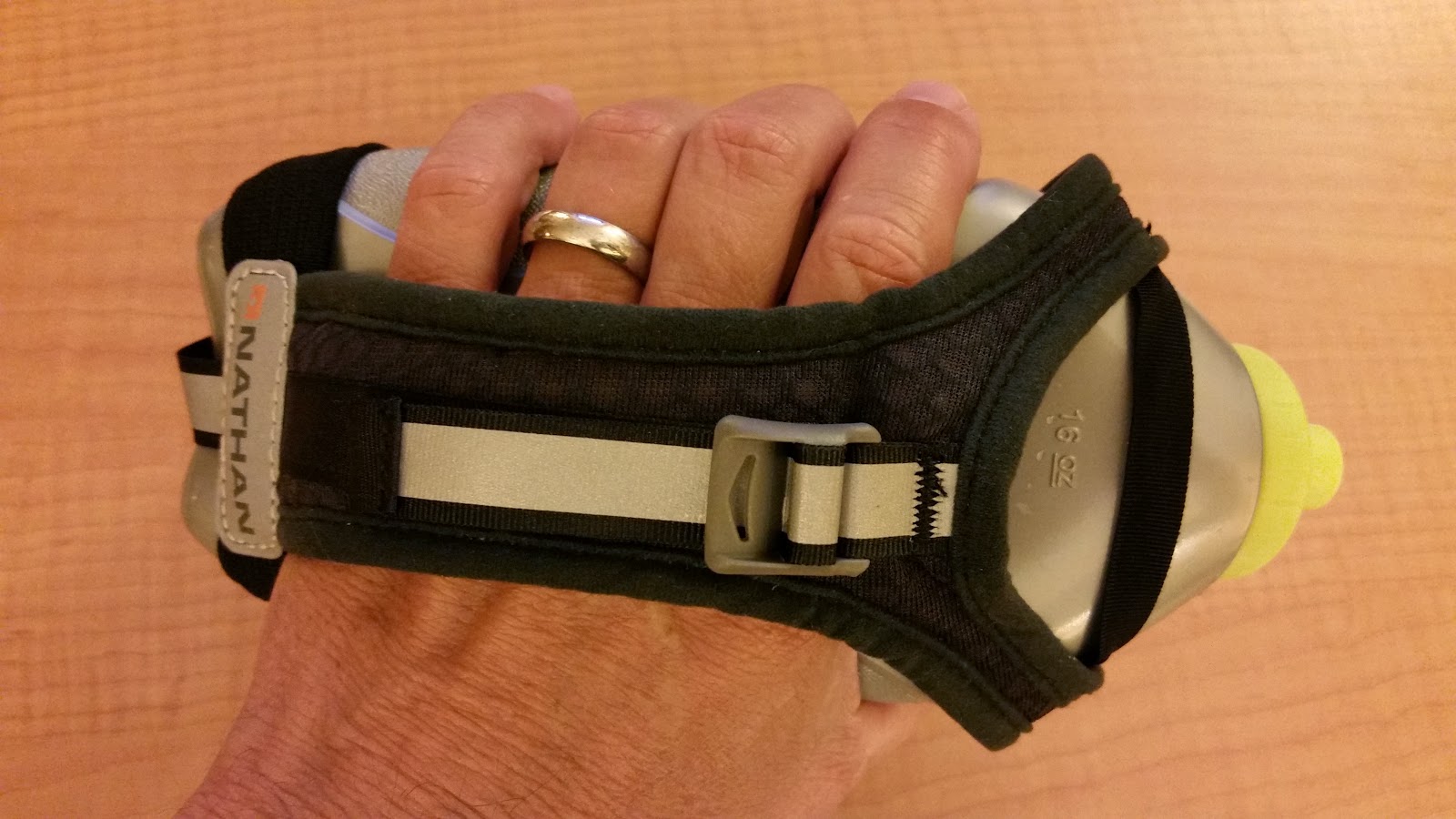 I have used the bottle only once and I think it will serve my needs for the next few weeks of my training.  The flask didn't quite hold the full contents of the 16.9 ounce water bottle shown below.  The pockets was perfect to carry my Olympus camera.  I thought that the combined weight of the water and camera would be a problem but I didn't even notice it after I got started. 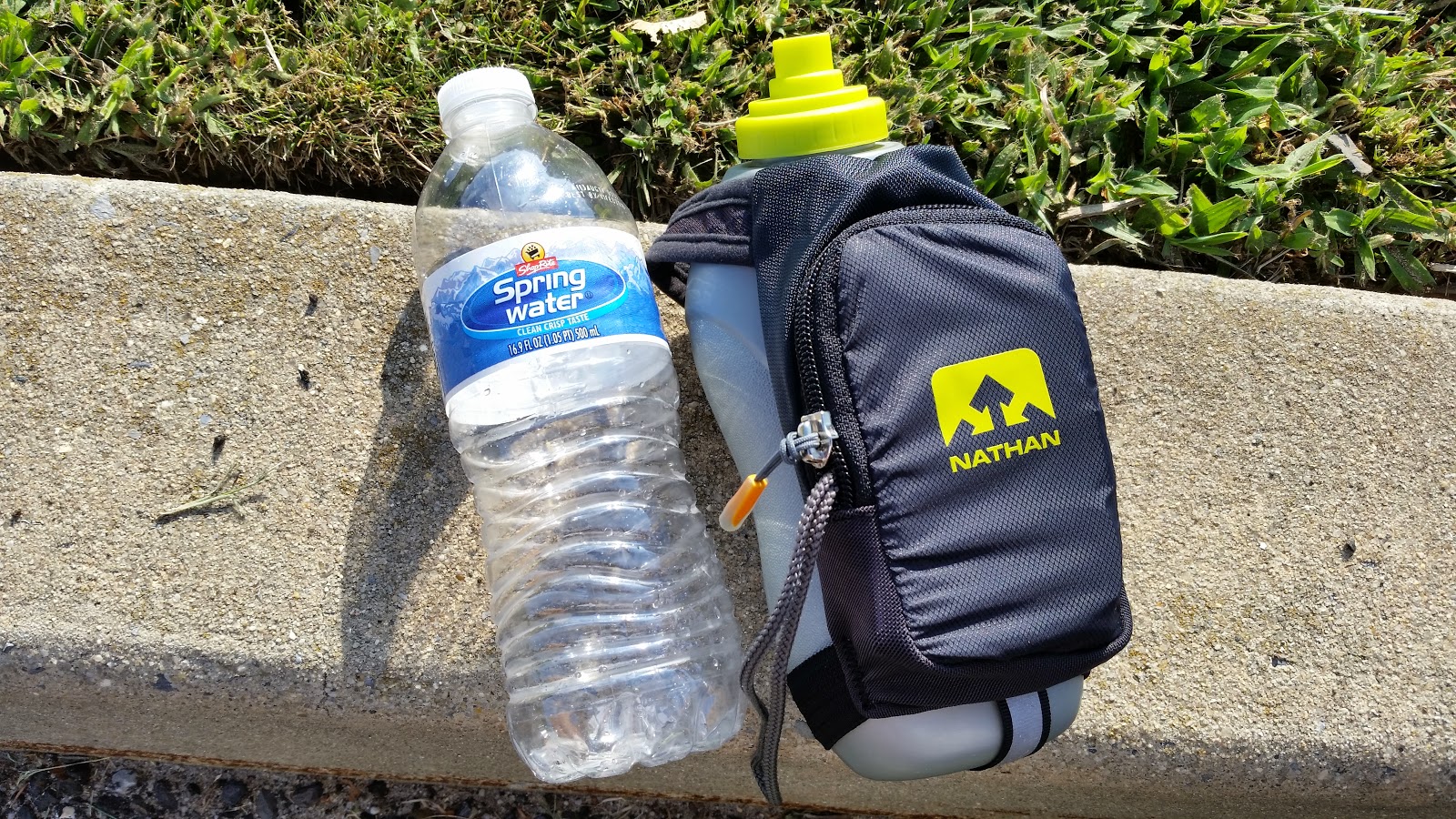 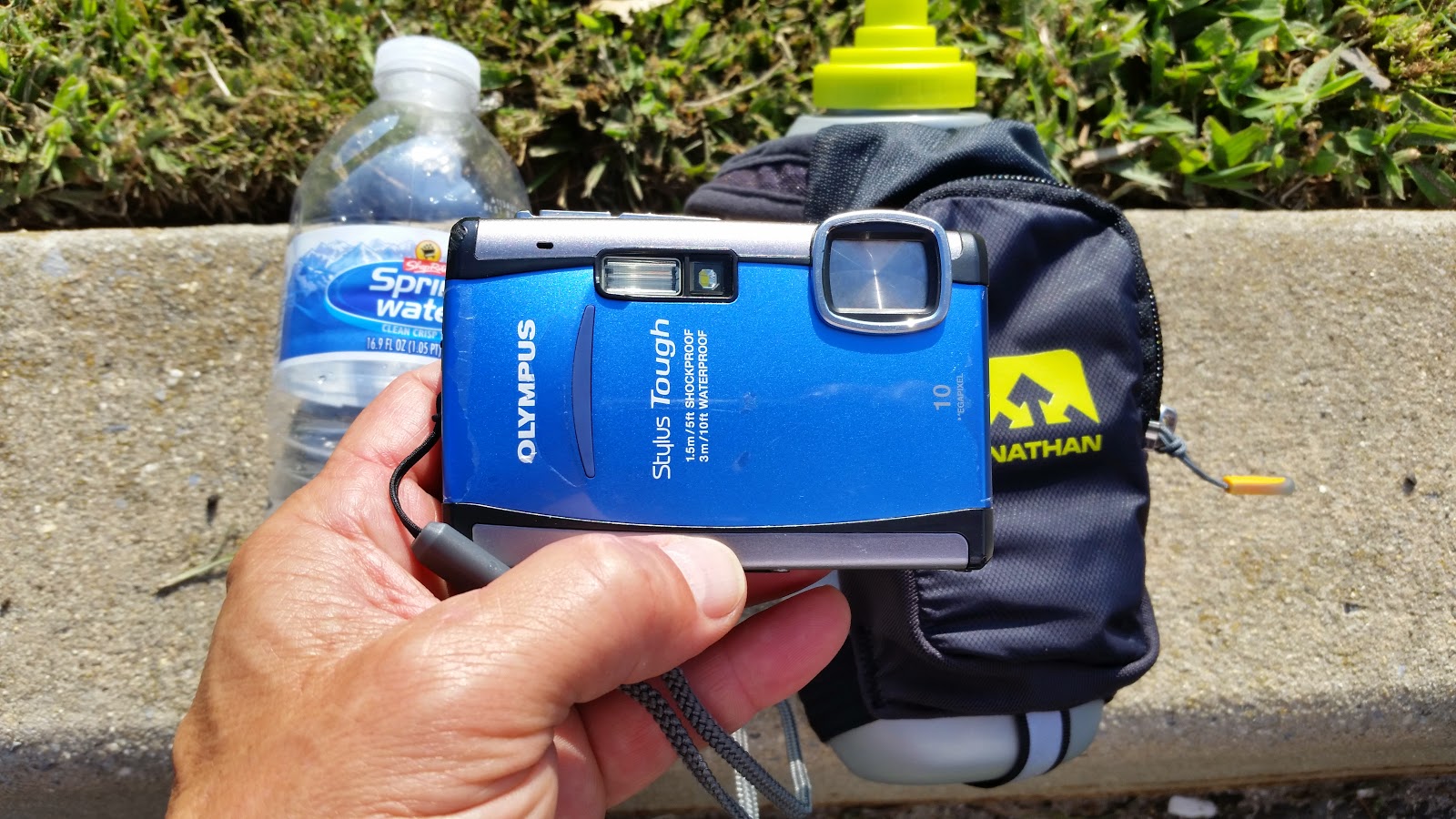 Thanks for reading.
Posted by treadster at 1:39 PM