I'm into the 8th week of my 20-week 15K training plan and even though it's the dog days of summer I often run at the hottest time of the day.  That's what my work schedule allows.  I've been frustrated that I haven't seen any improvement in my training run pace.  I'm in a rebuilding phase of my training so I shouldn't expect too much improvement but I haven't lost any weight either.  In truth, I might have lost a pound or two. 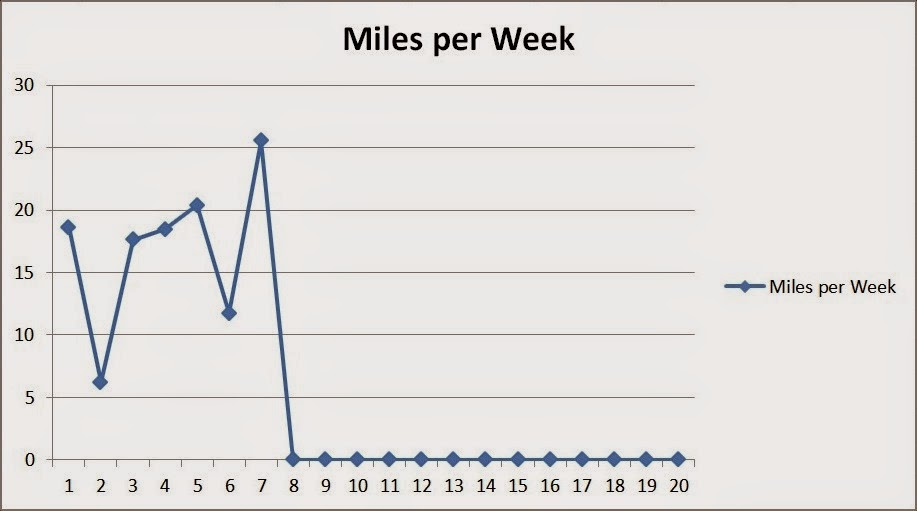 I spoke to one of my friends, an avid runner with a 3:09 marathon PR.  I asked him if he stretched.  His answer was an emphatic - no.  I dismissed his response as youthful ignorance.  Just barely qualifying as a masters age-group runner, he's not ignorant about running, just about being old.  I've found that old people like me take a little more time and effort to do just about everything.

Later on that day I ran into another friend and fellow Ironman triathlete in the hallway at work.  I told him about my frustration with my lack of progress.  I could see the words forming in his head and then there it was!  "Well - you're not as young as you used to be."  Yes, I have received numerous offers to join the growing ranks of the AARP class but I have always done what every married man does on those occasions.  I told my wife that her AARP membership had arrived.

Shortly after that harrowing ordeal in the hall at work I had an epiphany.  I had forgotten the teachings of my kung fu master (brown belt) and military buddy Glenn.  For months while we were stationed at Redstone Arsenal in Hunstville, Alabama we attended classes during the day and worked out together in the evenings.  Military life isn't as exciting as the TV commercials would have you believe.  Glenn taught me how to stretch and kick fung fu style.  I never got very good at kicking but I excelled at stretching due to my thin build.  Glenn was built more like a football player than Bruce Lee so he didn't have it so easy.  We'd workout for about 45-minutes and then I'd go run a couple of miles around the base.

I ran even before going to Redstone Arsenal.  I remember running in Army Basic Training.  We had a buddy run one day.  My Drill Sargent paired me up with another soldier.  We were the second pair in our company to finish the race.  The first duo beat us by a long shot but we had a respectable race.

After I left Redstone Arsenal I went to Fort Bliss, Texas where I continued to run, and stretch.  As I think about it now, some 30-years later, I realize that I was a pretty good runner.  I only ran in competitions a few times while in Texas.  Once was to vie for the privilege of representing the base at a marathon in Washington.  The first four finishers of the qualifying half-marathon were selected.  I came in fifth with a time of 1:29:32.  I also ran for my Physical Training (PT) test.  I think we had a PT test every year.  We had to do so many push-ups, pull-up, and run 2-miles within a certain time limit.  The time limits were graduated by age.  An older soldier had more loose requirements.  Soldiers who didn't pass their PT test were relegated to the "Fat-Boy" program.  I recall finishing the 2-mile track course in 12:06.  If I could only do that now!  I'm sure that the fact that I had so rigorously kept to a stretching regiment in Fort Bliss helped me perform well in my timed events.  That is what I need to get back to, my roots, so to speak.

All this nostalgia is brought to a head because this weekend is my 35 year high school reunion.  I didn't attend - maybe Susan and I can make the 40th.  All I can say is "What the heck happened?  They all got old."

Fortunately, I haven't changed a bit.  I have the same awesome hair.

So, this week I started stretching again.  I just do a few exercises.  I stretch my knees/quads, groin area, calves, and hips.  I usually stretch before I run because I'm too sweaty afterwards.  I try to spend about 20-minutes stretching.

I've stretched twice before publishing this blog and my pace has already improved by about 20-seconds per mile.

Posted by treadster at 6:45 PM