I missed the cold and wet Publix Georgia Marathon (DNS) on March 22nd due to a lack of training.   That makes this the Ragnar Trail Relay - Atlanta, GA race on April 10th and 11th, the first race of 2015 that I have completed and my first relay race ever.  The Atlanta Ragnar Trail race is one of eleven located throughout the country. 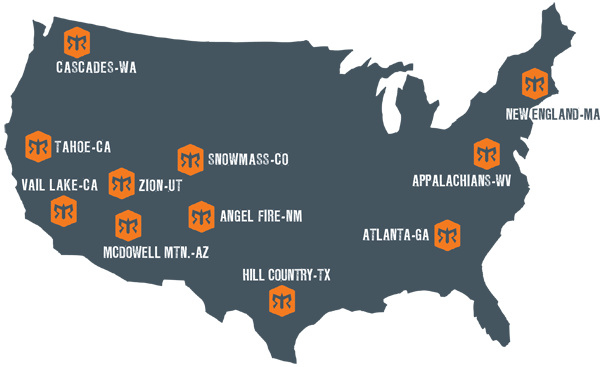 I had a rough start which included working later than expected on Thursday night and getting a flat tire on the way to the venue on Friday morning.  I was finally in Conyers, Georgia at the Georgia International Horse Park just after 11:00 a.m. 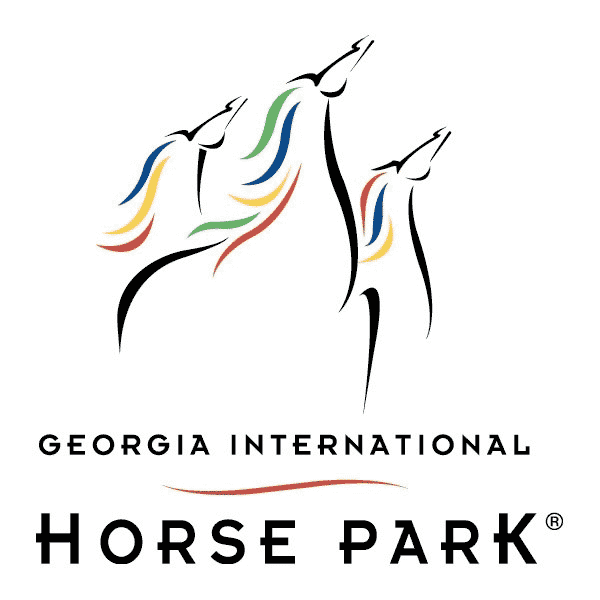 I unloaded my gear and parked my truck in the designated parking area where whatever air was left in my ailing tire was allowed to peacefully hiss until it exhausted itself.  Sadly for me my spare tire had been stolen while on a trip to Oklahoma City years before and I had never replaced it.  With the help of my Ragnar team captain Chuck, I would have to deal with that later.

I had over packed.  I bought far too many clothes.  I decided after finishing the first course that I would remain in my own filth until the race was done.  That negated much of my wardrobe.  I brought four pairs of running shoes, one pair of sandals, about five short sleeve shirts, two long sleeve shirts, a light jacket. two pairs of sweat pants, six pairs of socks, a neck warmer/beanie, two towels, a sheet, two folding chairs, a canopy tent, a cooler, sleeping bag, yoga mat, a backpack full of gadgets (Garmin watch, Garmin Virb camera, lights, extra batteries, chargers, etc.), and a bag of food stuffs Susan had packed for me including homemade chocolate chip cookies she made the day before.  Unfortunately, I didn't find much of what Susan had packed for me until after my race was over and I was back home.  I also brought trash bags, paper towels, and the all important extra emergency toilet paper.

I was the second of the eight runners on the Worst Place Scenario team (Bib # 83), not to be confused with Worst Pace Scenario (Bib # 117), to arrive at the venue camp site.  The Running with Caesars team I mentioned in a previous post was from last year's team so we decided to change it.  The new team consisted of five Air Traffic Controller coworkers and two guys, Jared and Nate, that joined us from Knoxville, Tennessee.  Nate was the youngest and fastest of our group at 28 years old and I was the senior statesman by a thin margin just beating Thom by a few months.  I helped Chuck setup a few things before he was scheduled to volunteer at the transition tent.  The race started for some at 10:00 a.m. on Friday morning.  The last group to start was six hours later at 4:00 p.m.  The first runner from our team was scheduled to start with the 3:30 p.m. group.  Start times were based upon the estimated overall pace of the team as compared to the other teams.  Each runner entered a 10K mile minutes/mile pace during registration to allow the Ragnar race director to calculate the team's pace.  Most of us estimated about an 8:00 minute/mile pace, except for Nate who estimated a 7:00 minute/mile pace.  He must have been sandbagging because he's way faster than that.  We thought well of ourselves, as a group, to post some fast times which put us in the next to last group to start.

Our runners, in starting order, 1) Juan Mendez, 2) Neil Farmer, 3) Chuck Phillips (Capt), 4) Louis Angotti, 5) Chris Kojali, 6) Thom Mercer, 7) Nathan England, and 8) Jared Lawrence.  The race starts with the first runner completing the green course, the second runner completing the yellow course and the third runner completing the red course.  Like a stoplight - green, yellow, and red.  The fourth runner completes the green course again, and so on until twenty-four course runs have been completed.  When it's all said and done each of our eight runners should have run each course once.  Only one runner is out on the course at a time so there are breaks of about 5-6 hours between legs.


All three courses were well marked albeit wet and slippery after the rain. 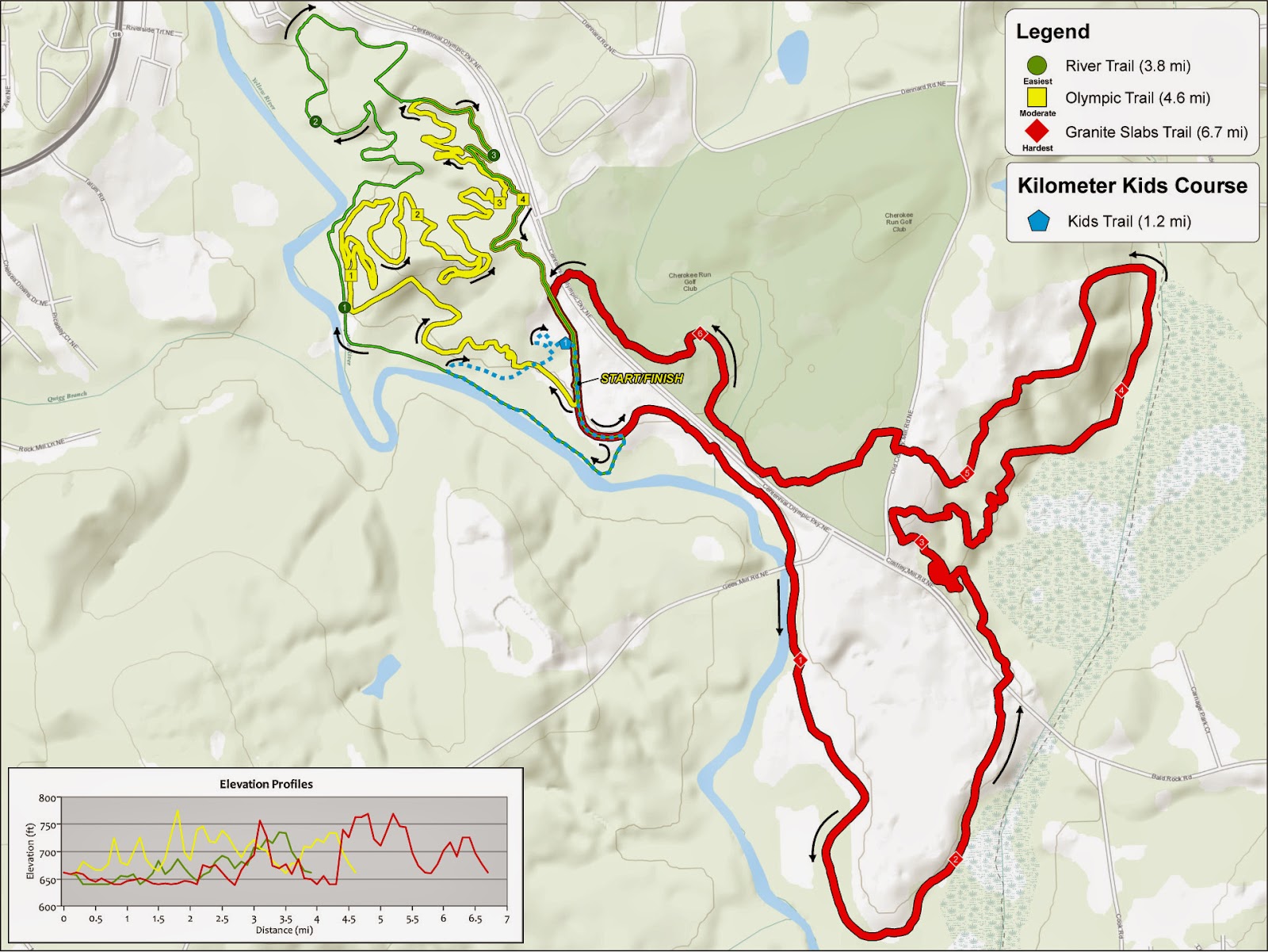 The yellow course was my first leg.  I just needed to estimate Juan's finish time and be at the transition tent ready to take over.  Chuck would do the same for me.  My first run started before dark.  As Juan ran into the transition tent he handed over the race belt and I was off.  The 4.6 mile yellow course was full of twists and turns.  The occasional small tree stump or rock in the trail meant that I had to keep my eyes on the narrow path.  Most of the trails were dry with only the occasional wet spot.  My Inov-8 Roclite 268 trail shoes proved their worth though and I decided right then and there that I'd wear them for all three courses no matter how dirty they were.  They would prove their worth on a steep section of the red course where two other runners were slipping and sliding, and clinging to trees as I powered past them.  I slipped a few times but never completely lost my footing.
Chuck, Louis, and Chris completed the red, green, and yellow courses, respectfully before Thom started the red course.  Not two minutes after Thom was out on the red course, the race director stopped the race due to weather.  The race was put on a two hour hold and the next two runners, Nate and Jared were skipped.  The twenty-four course runs was reduced to twenty-two.  Thom however was already on the course and, like the other runners on the course, he had to finish.  It started to rain and it rained hard.  While we huddled up inside our tent Thom was out tackling the tough red course in a monsoon.  He made it back to the tent none worse for wear.  Not all the runners were so lucky.  I think there were a lot of twisted ankles that night.


I started and finished the easy green course in complete darkness but for my headlamp and flashlight just before midnight and after the rain had stopped.  I found myself starting the course fiddling with my headlamp, forgetting to start my Garmin watch right away, tripping over a poorly placed tent rope twice, and briefly getting off course in the maze of tents.  I would learn from my mistakes.
I started the treacherous red course before dawn.  The course starts out easy enough for the first two miles before going crazy in the woods.  As luck would have it shortly after I entered the woods the sun started to rise.  I was saved!  The infamous granite crossing would be in daylight and not in the less than desirable flashlight.
The 2015 Rangar Trail Relay race is an experience I will not soon forget.  It was far muddier that I had expected, that said, I enjoyed the running part the most.  It was the hours of waiting between runs that was torture.  The weather, it could have been better.  I doubt it could have been worse.  As a team I think we did pretty well.  No one was injured during the race though we had two runners with previous leg problems that were still able to compete.

Ultimately the event turned out well.  The weather on Saturday was beautiful.  The ground started to dry up and I even got a little sun on my face.


What would I do differently?  I'd pack my gear days in advance.  I would buy and use a raised cot. I would bring a big clock to post in the tent.  At 3 a.m. it's difficult to remember who is out on the course, when they started, and when the next runner can expect to start.  A chart with those times and the runners finish time for that course would be perfect.  I'd take more pictures and use my video camera.  Bring a portable battery pack for my cellphone.  Most importantly, I will buy a spare tire for my truck.

What I did right.  I became less timid and more vocal when comparing my first transition to my last.   Consider that each runner is involved in six race belt and bib exchanges.  As they say, a race probably won't be won in transition but it could be lost there.  Part of my initial apprehension may have been because I was new to the team and unfamiliar with the process.  By the start of my second transition though, I realized that I needed to be heard to get the attention of my teammate.  At the end of my final leg I yelled my team number twice and the name of my replacement, 83... 83... CHUCK, as I entered the chute to the transition tent.  He was startled but was there to take over in seconds.

A spreadsheet of the preliminary race results, which were posted online on the Friday after the race, is shown below.  There are obviously a few anomalies including one leg which was over 5 hours in duration, which I removed, and several legs which were 00:00 (hh:mm) in duration.  These were likely errors as well.  That being said, the majority of the red course times are the longest and the majority of the green course times are the shortest which should be correct.  The red markers in the 35 minute range are a bit suspect as well. 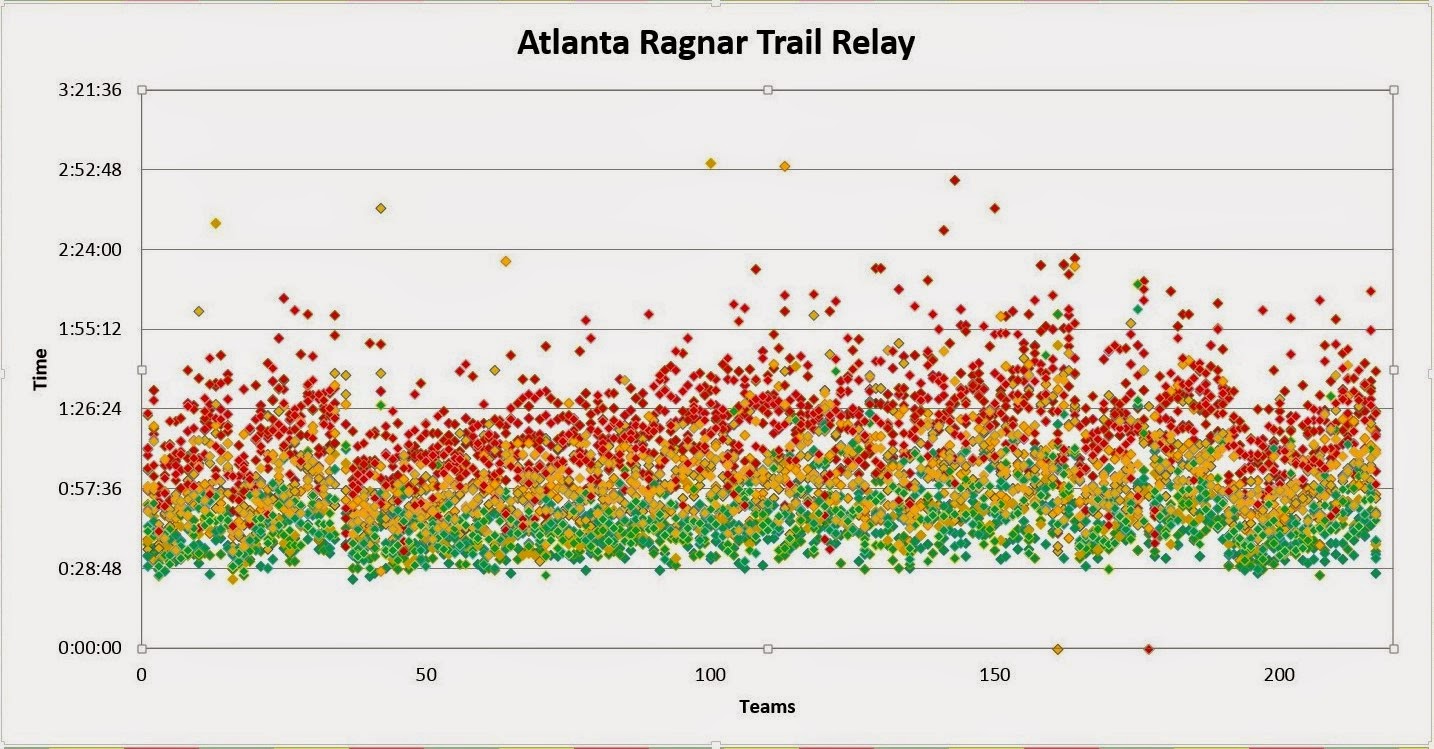 See the preliminary race results edited by me here. 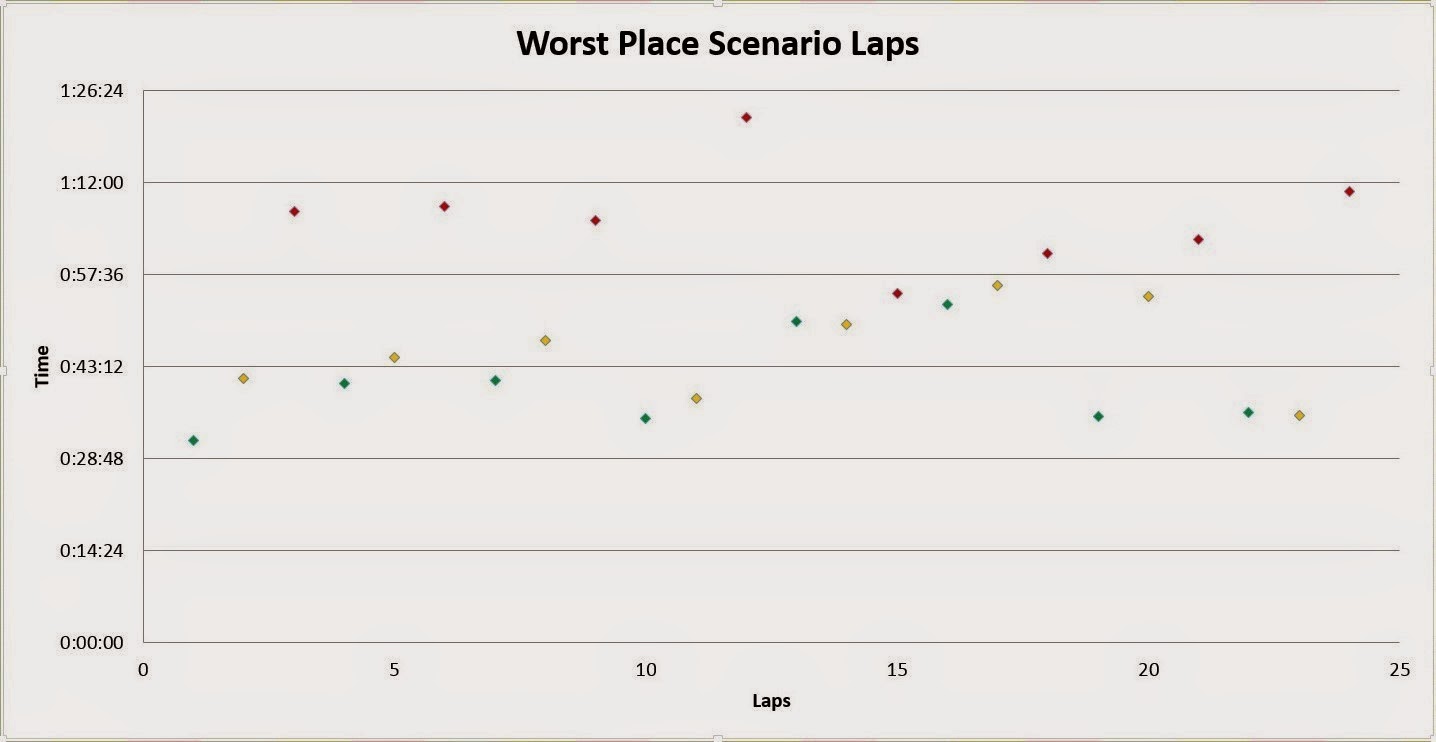 Our team competed in the Regular, Men's Open category.  We did very well.  I'm still waiting on the final results.  I'm pretty confident that we placed in our category.

Big thanks to Chuck for hauling me and my flat tire to the Conyers Tires Plus shop to get my tire patched early Saturday morning.  We left the venue just after Chuck and I had finished our final run of the race and well before our last runner, Jared was expected to finish.  My luck had changed as the estimated 90 minutes repair time was slashed in half as the customer in front of me decided to go to Firestone instead.  Winning!

Posted by treadster at 5:37 PM