Training - I have to preface this report by saying that I haven’t ridden on the road much lately. In fact, I hadn’t ridden on the road with a group of any kind since December of 2015 or, more specifically, in a bike club group ride since July of 2014. That's almost 3 years. My most recent non-trainer ride was with my grandson in August of 2016 when we casually rode 11 miles on the Clayton Connects Path Foundation trails at the Clayton County Int’l Park near my house. The Path Foundation also created the Silver Comet Trail.

I rode a full century on the trainer on Sunday, May 14th, and ran a 5K race that afternoon. I took my bike off the trainer on Monday May 15th and rode 30 miles with my old friends of the Southern Crescent Cycling (SCC) club less than a week before the Cheaha Challenge Gran Fondo race on Sunday, May 21st.
Getting There - The club's plan (and the Cheaha Challenge) was to ride the from Atlanta to the end of the Silver Comet/Chief Ladiga Trail in Anniston before backtracking to Jacksonville, Alabama where we’d pick up our ride packets for the Cheaha Challenge. That was on Saturday. On Sunday we’d ride the Cheaha Challenge, some riding the 124 mile Ultra distance event, others riding the 100 mile century, and still others riding the 44 mile distance course. The event had six different distances from which to choose; 24, 44, 62, 84, 100, and 124-mile distance. We had 16 riders making the trek west on Saturday with full SAG support at various stops along the way. A few others met us in Jacksonville for the race.

We also stopped in Dallas, GA, at the Georgia/Alabama state line, and briefly somewhere in rural Alabama where no one had cellphone service.

All our riders made it safely the entire 100+ miles to Jacksonville State University, the host venue for the event, where we checked in and picked up our t-shirts, bib numbers, and timing chips.


Just as we arrived to check-in at our hotel the rain that we’d all been fearing finally arrived. It rained buckets all evening. Those staying in the upper floors of the hotel enjoyed the sound of thunder which made us all weary of the day to come, but Sunday came and, though cloudy, there was no rain. The forecast for 100% rain and thunderstorms from the previous days ended up overcast and humid with the sun occasionally peeking through the clouds to heat everything up a bit.  As the day wore on the roads would even dry out and provide a nice grippy surface to ride on.
The Race - Gran Fondos are timed events and the Cheaha is no different. There was a start/finish timing mat and several other timing mats along the course. The mats keep track of the 1st and 2nd King of the Mountain (KOM) times, and each rider's overall time which are posted in the results.

The start of the race for the Ultra riders was at 7:30 a.m. Riders lined up in front of the timing mat and waited for the call to roll out. At the start riders made a left out of the parking lot which was followed by a right turn onto Nisbet Street NW before turning right onto Highway 21, and so on. The first few miles had the riders start to string out and separate into packs. I stayed with my club mates for a bit until we got separated and I found myself off the front with another rider named Jose Acosta from Miami. Jose and I rode together until the 4th rest stop where we waited for the members of my club to arrive. After a few minutes they hadn’t arrived so Jose and I took off again. The next time I saw my club group they were going in the opposite direction headed toward Adam’s Gap. I’d see them one more time later in the day.


Jose and I stopped briefly a few more times. I was sure to take in all the nutrition including gels and Endurolyte tablets every 30 to 45 minutes. The rest stops were well stocked with food and drinks, water and Gatorade, and volunteers. I don’t recall a volunteer ever before grabbing my water bottle and asking me what they could fill me up with “water or Gatorade” but they did here, I took one of each. I have to say too that the course was beautiful. I didn't know Alabama had so many pristine mountains. I would see more trash on the roadside during one trip to work than I saw all weekend in Alabama. I only work 11 miles from my house.


As the day wore on each hill climb became more and more difficult. I was running a compact 34t/50t crank and a 12t/25t Ultegra cassette so, as it is apparently not uncommon, I got off my bike and hoofed it up a few of the steeper hills. Fortunately I made two good decisions earlier in the day. Firstly, I decided not to wear a light jacket. It never rained so I didn’t need it. I also didn’t put on any sun screen so I did get a little sunburn. Secondly, I brought along my cleat covers. I was glad to have them as I pushed my bike up the steep inclines.

The inclines are just the forerunner of the impending white knuckle descents off mountains. The miles I’d put on the trainer had not prepared me for these. I had decided at the onset that I would brake at the start of every descent and keep braking until I was safely at the bottom. Whomever I was riding beside at the time would quickly be out of sight long before I’d come around the last turn into the valley below. I’d put pressure on my pedals to quickly catch back up with them. Jose and I eventually met up with Cody Meyer from Birmingham. The three of us pushed each other, figuratively speaking, up and then back down Bain’s Gap until at some point Jose was gone off the front. Cody and I chatted about this and that which took my mind off the task at hand and that eventually led us to the pièce de ré·sis·tance, Chimney Peak. I walked a good bit of the road to the top of the mountain as cyclists whizzed by at 60-mph or so. My maximum speed for the day was 47-mph and I only did that because I could see the end of the road.
Results - Cody and I both crossed the finish line just under 9 hours and 4 minutes after the start resulting in a fifth place finish for me in my age-group. It was a long day. I found Jose, who had finished several minutes before us, to congratulate him. I found my club mates who had also already completed their rides. They were seated nearby enjoying the bar-b-que dinner provided by the event organizers. I was the first from my group to finish the ultra course. The rest crossed the finish line together after 10 hours and 40 minutes. Results

Since "if it's not on Strava, it didn't really happen" I've included my Strava activity as well.


Post-ride Thoughts - Afterwards, I felt bad having not stayed with my group but frankly, I was a lot more scared than I might have led on. My bike handling skills had suffered a bit from the hours I’d spent on the trainer. I felt safer with one rabbit to chase than a whole group of rabbits. I didn’t want to be that guy on the side of the road waiting for an ambulance after crossing a wheel and hitting the deck, and I surely didn’t want to ruin someone else’s day either.


Getting Home - The ride home back to Atlanta was shorter than the ride out, and again, we had awesome SAG support from the club. We had a few less riders, 13 in total. It was only when we were about 10 miles from the end of the trail that the bottom dropped out and we were soaked by rain. It got cold fast and I could hardly see through my dark sunglasses. The only notable events on the trip back were a copperhead snake and a loose cow on the trail. Neither of them were impressed with us.
Kudos - It was a great trip. The club’s organization was spot-on and was only outdone by the race organizers. All the rain that fell on Saturday night should have strewn debris all over the course making the descents even more harrowing but the event organizers had crews out sweeping up the course before most of us were even out of bed on Sunday morning. The volunteers were plentiful and enthusiastic. Roads were closed. Intersections were manned with police and/or other safety personnel. The residents of the city of Jacksonville and the university went out of their way to make us feel welcome. The only negative I'll mention has to do with the restaurant we chose on Saturday night. I won’t mention the name of the restaurant but I will say – don’t order the sushi! The chicken and fried rice was delicious but the sushi, not so much. On Sunday we ordered pizza which we had delivered to the hotel. That was a much better option.

The list of SCC Cheaha participants from their website includes 25 members. Some of these didn't attend. We had others who registered at the event and aren't listed.  Either way, it was a large group. 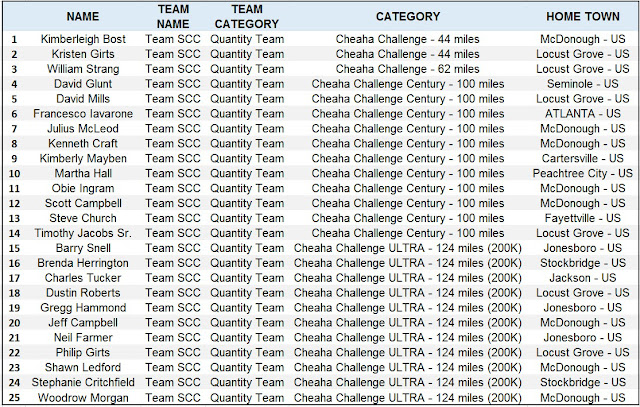 In Conclusion - Over the course of the past 12 months I’ve ridden my bike about 1,700 miles, approximately 1,400 of which were exclusively indoors on the trainer. There are two reasons for that. The first being that I, unlike most people, enjoy riding the trainer especially now since Zwift has come about. The second reason is that it’s safer. I don’t have to worry about a distracted driver killing me because they had to check their Facebook feed. The point I’m trying to make is that I felt completely safe during this race with the one caveat that I was surely gonna die on one of those hair-raising descents.

She had a bath and now old Betsy is in her rightful place again.

For the record, I completed 320 miles and 15,807 feet of climbing during the course of three days.