The 44th edition of the Southern Bicycle League (SBL) Wilson 100 century ride was on Saturday, September 23rd. The mass start was scheduled for 8 a.m. in Senoia, Georgia.

The night before the ride I put Look cleats on a pair of new Lake Cycling TX-312 (wide) tri-shoes. I just received the shoes in the mail that day and planned to break them in with the long 100 mile bike ride. 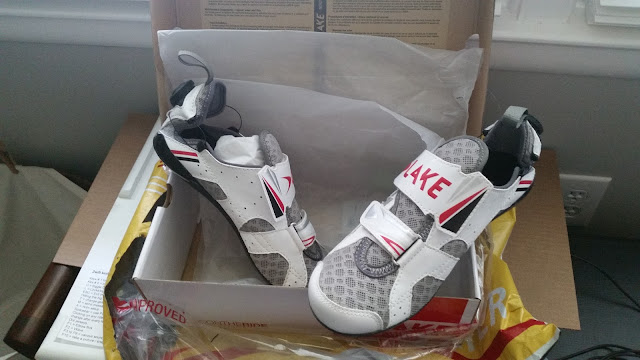 I had been coveting these shoes for years. In fact, it's probably been 7 years. I first saw them before I bought my now old Lake Cycling Hammerhead tri-shoes in 2010 but I could never find a retailer that sold the TX312s. I bought this pair directly from Lake Cycling. I took a few weight measurements to compare these shoes to my old Lake tri-shoes that fit like well worn bedroom slippers, and my light but less comfy Bontrager RL road bike shoes. 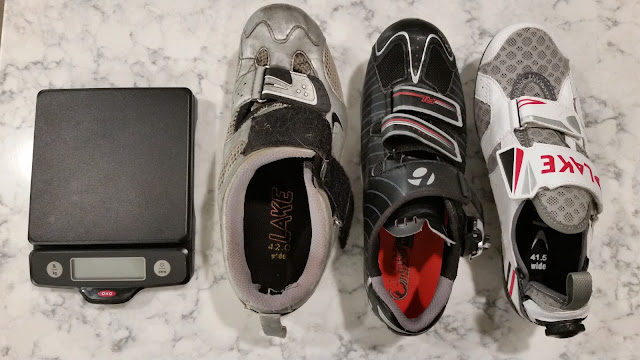 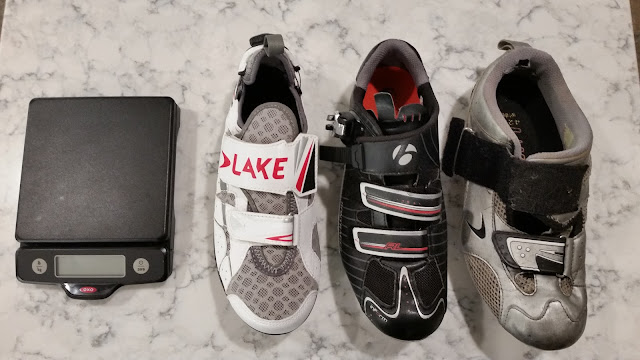 The weather forecast for the Wilson 100 called for a high temperature of the day around 86-degrees. My small group started about 30 minutes early, before it got hot. The group consisted of me, an old fart with a penchant for signing up for things before I'd fully thought them out, Brenda Herrington my Ironman Florida training partner and the de facto leader of our little band of brothers, Bill Strang a 50-something year old rider with the heart of a 25 year old, Barry Snell a dude who's so nice that you have to thank him for the pain he's inflicted after he's done pulling, and William Ortez a quiet rider who should complain, but he doesn't.


Before the ride I checked-in at the registration desk. I got my t-shirt. The t-shirts are short sleeve soft 65% polyester and 35% cotton blended fabric.

I hit the port-o-let to evacuate the bowels like a zebra on the Serengeti being chased by a pride of lions. I arrived so early that it was still pretty dark and there was almost no line for entry into the blue plastic poo shacks. The port-o-let on the right was empty and I entered eagerly. I had to get some business done before my 5 hour ride. When all was said and done it was as though a Smurf had been massacred inside. I'll not elaborate. I exited nonchalantly.

Ten days earlier I downloaded a turn-by-turn cue sheet from the Wilson 100 website. I used that sheet to created a gpx file on Garmin Connect which I uploaded to my Wahoo Elemnt Bolt bike computer. I also shared the file with my friends on Facebook. As we rode that morning I called out the turns, for the most part. I might have missed one here and there. It wasn't until mile 74, as we entered Zebulon, that we encountered a discrepancy in our directions. Brenda saw a route sign that directed us to turn left onto Hwy 18/Concord Road in the Zebulon Square. My bike computer told us to go straight. We circled back through the town square to make sure we were on track. Barry checked the cue sheet he'd gotten that morning at the registration table. It also had us going left onto Hwy 18. So that's the way we went. My bike computer proceeded to go berzerk trying to tell me I was going the wrong way. The road was marked though and as we rode on we felt more confident of the route we'd chosen was correct and I felt less confident in guidance from my bike computer.


The cue sheet and bike computer routes synced up again outside of Zebulon. We stopped at the rest stop in Concord just as they were setting up. We were the first riders to get there and, from what we heard, 15 miles ahead of the next riders on the route. It wasn't until about mile 80 that we were finally passed by a group of four speedsters.

After the ride Brenda and I went for a little run through Senoia. It was a very little run, 1.3 miles, for me and a longer run for Brenda, 4 miles. Senoia was bustling with tourists on Zombie tours on Saturday. The Walking Dead is filmed there.

When I got home I checked the route again. I was concerned that I'd shared the wrong route on Facebook and might have sent some of my fellow riders into oblivion. I appears as though the route I downloaded only a week before the ride was the 2016 route, although it wasn't marked as such. The online cue sheet I checked on September 24th must have been the 2017 revision because it had the turns that were posted and marked on the road. I later corrected my Garmin Connect Course file to match the new 2017 route.

The Wilson didn't seem as well attended as I remember from the last time I rode it in 2013. My club, Southern Crescent Cycling, didn't have the organized participation that I'd seen before either. That could have been due to the 6 Gaps ride in north Georgia being on the next day. The registration fee has gone up since 2013 and they implemented a wrist band policy to verify riders had paid the entry fee. Not everyone paid in 2013 and that still holds true today. As a non-SBL member (this year) I paid $55 to register and Events.com added a $5.72 fee on top of that. Sixty dollars might be a bit steep for a t-shirt, 3 pickle slices, some ice, and half a PB&J bagel. All those thoughts of routes and fees would go out the window if I had to use the Support and Gear (SAG) wagon. We didn't have the need for SAG support but the van did stop to ask if we were okay after we'd stopped briefly on the course to reconfigure our water bottles, etc. I left Senoia with 4 bottles but I forgot my Gu flask. My flask was still in my truck after the ride. That could have been a big fail. Fortunately, I didn't forget my Endurolyte salt capsules and a Clif bar.

All that said about the ride and my new shoes I'm sad to report that afterwards I've got a little post ride hip pain. The cleats on my new shoes might need an adjustment or be replaced with some cleats with more float. I used the gray cleats which, according to the Look Cycle website, have 4.5-degrees of float.  Cleats come in 3 float options: 0 ° black, 4.5 ° gray, and 9 ° red. It could just be that I need more time in the saddle in the aero position and less time on the trainer. I didn't get any blisters though!

Next time I'll get some pictures.

Thanks for reading.
Posted by treadster at 8:20 AM